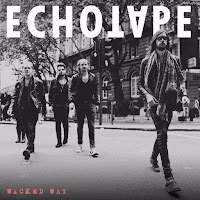 'Wicked Way', isn't that a title that can be claimed rightly by Waylon? Although I do not know a single other song by that artist, as far as I'm concerned it's his claim to fame. So now a band called Echotape with an album with that same name. Let's see how it fares.

Although Waylon's 'Wicked Way' rocks in a funky way, that's where all comparisons stop, so exit Waylon. 'All My Days' is a fiery rocker with a lot of urgency. Not just because of the lyric "No time for sleeping, we've got to get out of here". The whole song is up tempo with a sturdy pace bringing us all three minutes something further in life in an ultrafast way.

Wicked Way is an album with a lot of faces. "Ra ra ra ra ra"? The Vaccines come to mind immediately, while 'Whiskey Bar' (really? And ra ra ra?) itself reminds me of The Rifles. The rhythmically fast played electric guitars all point in that direction. Alternative rock U.K. style. Not much later it's neo-folk à la The Lumineers that comes by. The pub and mates is another influence. The background singing is just like it happens there or in the stands. In other words the music of Echotape certainly is friendly. Another influence from the other side of the pond comes by as well, The Killers and Kings of Leon rock. 'See You Soon' owes a lot to these bands in the way the song is built up and its inner dynamics.

Echotape is a band from southern England that is around since 2010. Its reputation has been slowly built through a few singles and touring. The album was released in the UK during the summer, the Benelux release follows a little under a half year later in part through playing the Vestrock festival in The Netherlands.

So its easy to criticize Wicked Way. Echotape truly needs to find its own unique voice. For a debut album following idols is no problem. We all started out somewhere in life. In the longer run that is not an option, unless Echotape is able to become better as its examples. That at present is not the case.

To bend this review towards the positive, there are a few things that speak in Echotape's favour. The band plays with the enthusiasm a band trying to make it has to play with. On top of that it has singer, Marc Burford, with a nice, not too rough voice. The band knows what it is doing and understands how to make songs interesting. Let's not forget about the songs themselves. Several of them on offer on Wicked Way are quite nice to listen to. 'Pray' is one of those examples. A great build up, guitar solo and a want to shout along chorus.

Taking Wicked Way in as a whole I hear an album that does not have a uniqueness. Instead it holds a whole bunch, not all though, great songs from different backgrounds that shows that Echotape may have been a great cover band of different guises and now spreads out its own wings in all the things it is good at. That greatness as Echotape may just be around the corner for the band. The basic ingredients are all here. Keep trying, gentlemen and you may find.

You can listen to 'We've Been Dreaming' here: