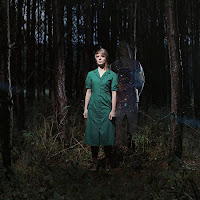 During her support show for the Elenne May cd presentation in the Amstelkerk in Amsterdam this fall, Mevrouw Tamara announced that she had started to write songs in English and played a few for us. This month her new EP was released and holds four songs in English. I do not know the reason for this switch, but let's take a look at the songs, as that is what music is about.

The title track is an all vocal song with layer upon layer of Mevrouw Tamara's voice. In an intricate composition she weaves the different melodies and back and foreground voices in and over each other, leading to a track that, I have to admit that I had to work hard at appreciating, gives its inner beauty away only slowly. The effect is a not unlike a choir composition for a church. The voice is less secure and certainly not classically trained. The result is certainly something similar in nature. The fact that this is all Mevrouw Tamara's work, makes 'Lost In The Forest', the more impressive. It is not hard to imagine the nuns of old singing this composition somewhere in the Middle Ages in a dark church lit by candlelight only. When I read that everything was recorded in one take, it makes the result the more impressive. Tamara van Esch has a very keen ear for melodies and harmonies. Something I noticed live when she built her parts on the spot, recording little bits and pieces and replaying them while starting on the next often while singing to.

When we switch to a guitar in 'Leave' it comes as a relief, but only for a briefest of time. It is not as if 'Leave' is a pleasant song. It is all about leaving, to saying goodbye to something that was. It was good at some point but not any longer. The point of severing and the beginning of something new. This EP is about breaking up with her boyfriend. It is even worked out in the fading figure in the artwork of the EP. A lot of people may wish to receive a goodbye like Lost In The Forest.

The mood for Lost In The Forest is set. Introspective music, with an artist looking in to herself, her mindset, her own well-being is examined in-depth. The result is music that is spell-binding, addictive and of a sort that is close to the skin, if not under it. If you let Lost In The Forest work on you, any one will find that it is extremely easy to establish a relationship with this music. It is of an intimate nature that allows for bonding. The introspection is all but excluding.

Lost In The Forest is 100% Tamara van Esch. Except for 'Leave', the EP was recorded at her home. Everything you hear is sung and played by her. 'Leave' was recorded by Pim van der Werken who also mixed the EP. Again I am struck by the way how intricately layered the music on the EP is. How the dynamics in 'Leave' work. From the soft beginning to the force of the middle part and the switch to the piano as centre instrument near the end.

The piano is in full force in the third song, 'Picture Us Together'. Which comes through in the art work, as in something of the past. Something that is no more. "He can not picture us together" is the real message of the song. Which is a radical departure from the title of the song. From the positive or better a longing, wishing, to the negative. Again the intricate quality of the music strikes me. In such a soft toned song, so much is happening, including the mood that hangs heavily over all that is going on. Although most is piano and voice, there are other elements that show the craftsmanship of Mevrouw Tamara in arranging her songs.

It ends with 'In My Cocoon', one of the songs she played in the Amstelkerk, with I think 'Leave', of this EP. 'In My Cocoon' is a fitting end. The right place where introspection is concerned. Again the piano plays light sounding notes accompanied by a guitar and something I'll call "mood". The darker sounds in the background that meander under certain spots in the song. 'In MyCocoon' is a song like a meandering brook through a forest, with soft trickling water sounds. Songbirds warbling on their branches. Wind rustling the treetops. And so this imagery brings me back to the artwork yet again. Full circle.

Lost In The Forest holds only four songs, but is very much worthwhile to invest time in. Let the songs wash over you and you'll be conquered by the soft tones of Mevrouw Tamara. Never to want to let go again.

You can listen to and buy the EP here: