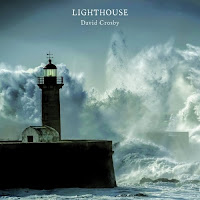 Lighthouse is an album in which the music is stripped down to the bare essentials. Crosby's voice, some harmonies and acoustic guitars. Listen more carefully and a bass and keyboards can be heard also. That is about it. The music is instantly recognisable. Even beyond just David Crosby, There are sequences in opening song 'Things We Do For Love' that could have been on any of the more acoustic Neil Young albums.

Being such a bare album allows me to assess the quality of the album in a much more direct way. There's hardly anything left to distract me from the bare essence of the nine presented songs. Because of this subdued atmosphere Lighthouse is an album that needs attention. Crosby wants his listeners to come up close and truly listen. That is best achieved with a headset on. That allows me to become one with his music and the modest yet refined nuances in the songs on Lighthouse. Undeniably the album grows on me.

I've never been a fan of David Crosby. I'm a fan of his voice as part of a harmony. as I once read, it is as if he isn't there, until the moment that his voice is taken out and things fall apart. All these decades down the line, things have changed somewhat. I truly liked 'Croz', his previous album, just as I like Lighthouse. It holds the typical David Crosby kind of singer-singwriter music, with hints at jazz deeply steeped in Westcoast music.

It is 51 years since David Crosby broke to a bigger audience with the international breakthrough of the Byrds with their superb cover of Bob Dylan's 'Mr. Tambourine Man'. Since he only became better and better known: a true rock star, with all that brings. Now his highest, commercial achievements lie decades behind us. With Lighthouse David Crosby adds a superb album to his oeuvre. No, there's nothing new here to be found. His song 'Triad', on Jefferson Airplane's 'Crown Of Creation', could have been on Lighthouse and no one would have complained. But, for everyone who likes his music, Lighthouse is an album holding some of best songs Crosby wrote to date. 'Somebody Other Than You' even holds an urgency that many 75 year olds can only dream about. In their wildests that is.

It's time to leave you alone with this album. Let it grow on you, like it did on me.

You can listen to 'Things We Do For Love' here: