Kairos, September 2016 by .No on Concertzender

In a desperate attempt to catch up with actuality, Wo. listens to another edition of Kairos, the monthly radio program by .No on Concertzender. What will he hear in the September show, after the sort of ordeal he went through during the August one. Let's move forward fast, so you can learn of his endeavours into .No's wondrous musical world.

What a fright. I do not recognise the website! Everything has changed and yes, finally I see the right link to the show. White and purple, to commemorate the passing away of Prince? I'm not sure I like the change, but in a while I simply will not know any better.

We start with esoteric, moody music. Minimal drones wash over me. Several layers of drones move over each other, seem to collide, but don't. In the end it all sort of fits together. The straight dromes, the warbly ones and the dark ones moving in the undergrowth. But what is Ken Camden trying to achieve in his 'Jupiter'? It says he plays guitar and computer but what I'm hearing is all electronically induced.

The droning sounds slowly give way to an organ. .No's mixing skills are at work, but there's no mistaking a move into other spheres here. It is Limburg composer André Stolwijk's composition 'Vater Unser' as played by organist Jo Louppen. Music as played in a Catholic church at half time. Non-obtrusive, extremely serious and religious. At the same time it is possible for the organist to play his own compositions instead of a Bach one or someone like him. Perhaps at a moment like this Stolwijk premiered his 'Vater Unser'. That moment when all have received the communion and contemplate sins or dearly beloved ones, while the organist plays something at will.

Ken Camden returns after Vater Unser' is brought to a climax. Another fragment from 'Jupiter'. Drones move in between the wilder organ notes, no longer suited for a mass. (I'm afraid Stolwijk went a little off the little path here and was sacked as church organist after this eruption of notes. Wrenching the whole church out of its contemplation.) Again I can't help but wonder, where is the music in this? Where is the beauty? I just don't understand what is offered by Camden and am almost relieved when a choir sets in with deeply felt singing. Something I would never for one second think of to play myself -no guitars in earshot- but beautiful it is. I close my eyes and let myself be carried away by Gabrieli Consort as it sings itself through several of Thomas Morley's 'Funeral Sentences'. The recording uses the full space and acoustics of a large cathedral or less romantically the effects of a modern studio or even the least romantic the effects on a laptop. But my guess is the former. This is beauty in one of its most pure musical forms. I am totally in the mood for this right now. 10 Minutes? No problem.

I can't help wondering about the enormous contrast between the music on offer so far. In a way there is a parallel. The voices can be seen as drones as well. Drones that move in and out of and passed each other. But Camden's drones are so lifeless, so cold, so Artificial Intelligence 21st century on the move, where the singing can not be more human and warm. "Amen", let me just quote the final word sung here.

Soft piano music takes over. An album that has come by a few times in the spring Kairosses, 'Rothko Chapel'. It is Eric Satie's 'Gnossienne No. 4' played by Sarah Rothenberg. The mood fits so well with the Gabrieli Consort. Just little lines of bass notes, overridden by a lead melody, that also sounds so basic and simple. Yet the effect is so large, larger than life. These notes wrap themselves around the world. Taking it all in.

A voice cuts in. I recognise Tonnie Dieleman's and his Sealand accent. His spoken word performance 'Water' takes over until his bowed acoustic guitar chimes in with its direct, screeching quality. 'Uut De Bron' was one of my two favourite albums of 2015, so I'm glad to hear it come by again. A marvel of music, atmosphere, stories, spoken word, interviews, more atmosphere and even some songs. A monument for a world nearly or totally gone. 'Water' moves into the instrumental 'Onder Zaamslag', that with some fantasy could be called a jig. A song to dance to at a 17th century Sealand wedding. A slow late at night one, the jig for the road, before all went home.

Another piano takes over. This time more melancholy, with a longing for something. What I can't determine, but it is trying to say so with these notes. I listen hard, but I just do not speak this language. Peter Vanhove plays Lodewijk Mortelmans' 'Weemoedig Aandenken'. Looking at the title I'd say it will be a longing for someone lost, but it might be something, like the innocence of youth or the loss of a friendship. Vanhove plays the notes just right so that the title is evoked in music.

When another piano morphs itself into 'Weemoedig Aandenken' the theme of September 2016 is clear: piano music. Not that all is piano. Yet each move to something else works without disturbing the piano atmosphere. But then, we are only half way, so what do I know?

'Andante Cantabile' by Alexander Scriabin is played by Kyoko Hayashi. Why not? Italian title, written by a Russian, played by a Japanese? This is 2016. Anything goes, although that may change all to soon. Softly played notes move towards hints at madness and chaos. Hayashi obviously knows what he's doing, playing this composition in a virtuous way. Whether Scriabin knew what he was doing all of the time while composing, I doubt at some passages. None the less it is an intriguing composition.

It's been a while since Silmus was on Kairos. It returns with 'Bare'. A dark composition by Gert Boersma, based on an acoustic guitar with a lot of moody instrumentation around him going on. 'Bare' is not out to please but to puzzle, to quiz. Very present, but mystical. Beautiful for sure.

'Bare' moves into, piano music and mother nature. I hear a bird, monotonous. And then what? 'Evoke Ewok', we are in Iceland. No Icelandic "hakka" here. Deep mysterious moods come out of my speakers. Like mist rolling out over an almost bare landscape. Here and there something sticks out of the fog. A tree? A hill top? A human being? A troll? It is too dark to see clear. Ulfur puts the pictures right in front of my eyes with this mysterious music.

To come up with a song called 'A New Home' now is not so strange as it seems. It could have been the rooftop we saw in the mist. Annelies Monseré talk-sings and oohs herself through this bare composition of atmospheric sounds and a few guitar notes, combined with the sound of fingers moving on the strings with a lot of echo on it. It is not my music, but in combination with what happened before it speaks to me. Loud and clear.

The next cut is radical. A classical trained voice with a cathedral load of echo behind it takes over. The King's Singers sing John Tavener's 'The Lamb'. The poem by Margriet Ehlen is squeezed between a sequence of singing. About time being caught in emotions. I don't like 'The Lamb' I notice. To monotonous to my taste. Something like what happens to me with Pärt often on this show. 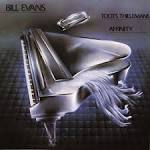 And then a harmonica comes in. A tribute to Toots? Yes, it is. Jean 'Toots' Thielemans and Bill Evans work themselves though a Paul Simon song. A jazzy sort of song, but that may not even be a radical departure from Simon's original, as he has made a lot of songs based on jazz or as the undertone of his pop. I don't know whether I know 'I Do It For Your Love'. I find it's on his 'Still Crazy After All These Years' album, so I must have heard it. It has not made a lasting impression I'm afraid. Evans tinkles away in improvisation and Toots sprinkles his famous sound over the song. It just reminds me of 'Turks Fruit', that it what this does.

James Hatfield? Lars Ulrich? Is .No taking a radical departure from the concept of his show and is this final song an introduction to a metal themed show for October? Well, you never know with '.No, but I'd say no. 'Nothing Else Matters' is played by Scala & Kolacny Brothers. Yes, on piano, while we hear a children's choir sing Metallica's biggest hit. The song after which the band lost itself and its focus for a few decades. Yes, I like this version. It works with a choir alright. If anything it shows the strength of this ballad written by a thrash metal band.