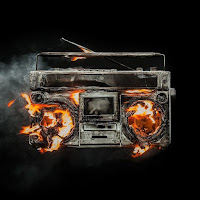 Does the creative team surrounding Green Day have predictive gifts or was it inspired by the recent Samsung debacle? Fact is this sleeve rather looks liked the stricken cell phone right after it prematurely met with its ultimate destination.

What more or less is shocking to realise is that Green Day and I go back 22 years this year. Like most of the world the band entered my life with its breakthrough album 'Dookie', including those great hits. I followed the band through the years and noticed that the band gained more and more commercial potential that ended with stadium sized shows and festival headlines. Not all albums were fantastic, but several, like 'Nimrod' and 'American Idiot' were. The trio albums released some years back in a few months time would have made one great album if only edited.

In 2016 I am presented with Revolution Radio and I welcome back Green Day. The songs that preceded the release on the radio, already tickled my fancy and the album as a whole does so again. No, there's nothing new under the sun. Green Day simply does what it is extremely good in: presenting us with extremely melodic punkrock songs with a pop element that just shines like the sun on a warm summer's day. To put it in other words. The drums pound away, the bass fills up all the holes and guitar does the rest, melodic overdubs and all. Over it Billie Joe Armstrong sings his lyrics, using all the different sounds his voice masters.

The album does have a sort of gimmick. Songs start soft, even muted, before the punkrock heaven breaks open, providing Revolution Radio with a sort of dynamics that is unusual. All else is sounding very familiar. As far as I'm concerned on Revolution Radio that is a good thing. Like I said this is what Green Day is good at. Excuse me, extremely good at. Almost all songs have that bundled energy coupled to a fine melody. In other words, fans are provided with a whole bunch of new songs to sing along to at live shows, at home or under way. What more does a fan need? Not a lot in my opinion. A fan is conservative. Any developments have to be fought over. Some bands do that and win, others lose. Green Day just provides and when it is on a level like this new record, no fan has a reason to complain. Nor has a critic any reason to piss acid. Green Day is larger than life in all ways necessary.

But is there a major hit on this album?, you might ask me. Well, what is a hit? A song that is played on the radio, a lot. And I've heard Green Day come by regularly recently and not just old songs, what happens when DJs don't like the new songs. So, yes, there are. Perhaps not chart hits, but I do not know most of those songs nowadays. Most songs on Revolution Road are catchy and easy to remember. That spells a hit to me.

Almost traditionally, the last song is the totally other side to Green Day, the acoustic guitar pop song. This time a soft ballad. That side comes through in other songs sometimes as in interlude or coda. 'Ordinary World' is the real thing. If anything it shows that this band is no one trick pony, but I'm happy it's just one song. 12 Songs like this and I would most likely not be a fan of Green Day.

With Revolution Radio Green Day consolidates its position as leading punkrock band in a great way. So no complaints from,

You can listen to 'Revolution Radio':