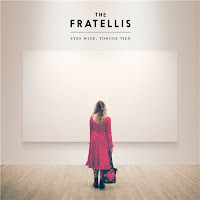 What a cover. The wonders of modern art stare me in the face. A huge canvas whiter than the room's walls are, the play of the spotlights, the relative darkness of the floor, the shadow play and all the contrasting colours in the dress and bag of the woman in the room. If The Fratellis had left the lettering out of the cover, it would have art in art and a true artful cover. Understandable that the band/the record company wants the name in there, but what a missed opportunity.

The Fratellis? I had almost forgotten about the band. Of course I sang along like the rest of the world with 'Chelsea Dagger'. Who didn't in, is it 2006 already? I saw the band perform in Het Paard in The Hague. But it is the second album the band released I really like. And after that silence for years. Doing some research showed that I have missed something here and there in the past seven years. A solo album, a band album even, but nevermind, here's Eyes Wide, Tongue Tied. The Fratellis and I are back on track.

Not that I play this album all of the time. I just like to come back to Eyes Wide, Tongue Tied and enjoy what I'm hearing. Gone is the novelty of 'Chelsea Dagger'. There is no repeating a novelty hit. Trying to copy doesn't help. After the second single after the novelty, whatever it is and often no matter what the intrinsic quality of this song is, the world has forgotten everything except the novelty hit. Having a novelty hit is a curse for a band. At the positive side the band scored a world hit, that most bands never reach at.

The pretending to be brothers Fratelli again come up with record that is full of catchy rock/pop songs that it is easy to attach oneself to. Putting on Eyes Wide, Tongue Tied means that a tidal wave of positively sounding hit songs push against my eardrums like there is no tomorrow. It is like these happy sounding songs hide in Jon Fratellis sleeve and all he has to do is shake his sleeves just a little for them to fall out. As if it doesn't cost him and his band members Barry and Mince any bother to produce these sounds. Songs like they have always existed. In other words, The Fratellis have a knack for writing and arranging extremely catchy songs.

The downside is that it is hard to point to one song that is extremely special. They all sound so true and well-meant. Some may appeal a little less to me, but that is because the melody speaks less to me. Not because it isn't another free-flowing song. A good example here is 'Thief'. The verse reminds me faintly of 'Ghostbusters', the chorus is heavenly and then comes a more prickly part. Some aah-aah always works. Almost like four songs in one. 'Thief' takes more bends than a rollercoaster and still is a poppy song. If I have to make one exception to what I just wrote it is about the fantastic 70s rocker in the best of the Faces style of 'Too Much Wine'. This rocker holds all one wishes for in a rock song with pop lyrics and melody. Including a slide (like) sound of the guitar.

At the same time Eyes Wide, Tongue Tied is far from one dimensional. When moving up into the album songs can be found that provide enough variety to keep the album interesting. The funky 'Dogtown' is almost a surprise. When a carnival element is added to the music, it does become a surprise. The horns pump up the song to another dimension. 'Rosanna' is also different, with a dancey rhythm, is starkly accented and has some psychedelic fillings also. Despite all that the song still holds enough pop elements to want to sing along anyway.

By then I know for certain that The Fratellis have produced yet another pleasant album that is worthwhile to listen to repeatedly. The band has branched out without losing sight of its roots of old. They even dare to take on a Deacon Blue like ballad in 'Slow'. 'Chelsea Dagger' may be a decade behind us, The Fratellis are who they are, a band proving its right to exist with another extremely pleasant, good and varied album.

You can listen to 'Me And The Devil' here: