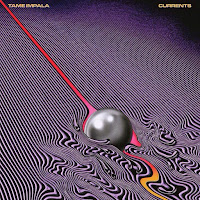 Tame Impala never got to me. Not even close. I thought the band to be a bunch of posers to be honest. I do not know yet whether that has changed, but there is so much ado about this album in the past weeks -if there's one album aiming for the number one spot of 2015, it is Currents- that I thought, lets give it a serious listen.

On the radio a DJ was raving about the opening track of Currents for a few minutes and how special it was, the musical joke in the middle section, the surprising turn around it holds before lauding the whole album as well. I listened to the track being played and had my thoughts.

Now that I have heard 'Let It Happen' a few times more I at least understand what she was talking about. There are a few things happening in the song that make it stand out. Kevin Parker lets his synthesizer make sounds as if it is about to break. Or the electricity is switched off for a second. In the middle section things really go wrong, as if a record keeps repeating because of a scratch. Recently I heard a cd doing that for real, so nothing surprises me, but on MP3 that really is new. Over the repeats new things are added, including a fat drum. Things move forward. The main melody sticks out, but the song itself? Parker sings with a tame, lazy, highish voice. In certain sections he sings through a vocoder which gives the track.a distinctive 80s feel. To that a lazy disco beat is added. Air's 'Moon Safari' comes to mind and when the bass plops in 'Nangs' and that totally dreamy voice Air has, e.g. 'Kelly Watch The Stars', is there for 100%. The synth keeps breaking down here as well.

It may seem strange to comment the following having read the above, but in 'The Moment' The Black Keys is not far away. Strip away the dreamy sequences add a guitar or two and bigger drums and 'Gold On The Ceiling' is there. Just as jumpy this song is. Later on 'The Less I Know The Better' really moves into this territory, with that disco sauce over it.

Continuing into the album the dreamy parts remain, as do the electronics. There is a real ballad in the form of 'Yes, I'm Changing'. The need for the street sounds in the background go beyond me, but they are there, just as the a bit irritating finger snaps. It distracts from the beauty this track does hold.

Somehow the thought creeps up that Tame Impala is the 2015 version of 1977 Bee Gees. Something I loved to hate but for some years I have to admit that 'Staying Alive' is one of its best songs ever. That may happen with this band, with a difference that not that much went on before as it did with the brothers Gibb. I had a history with their band as a small kid. The near endless stream of hits.

The mood on Currents does not really change. There may be a darker cloud here and there, the main message remains dreamily go forward towards a better world. "I know you'll be happier too, eventually", as Parker sings. The darker cloud has a silver lining. Not in 'Past Life', bloody irritating that dark, slowed down voice.

What I can hear, is that this album was made with a strong concept in mind by a band that is developing itself. What I do not manage, is to get into this music or the other way around. A part of that mystery is the voice of Kevin Parker. I remain the outsider where Tame Impala is concerned. That is a step up from total indifference. What I do know for certain is that Currents will not be my album of 2015. Not even close.

You can listen to 'Let It Happen' here: