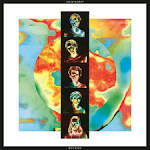 Not my everyday album Mothers of Swim Deep is. This almost weird hybrid of psychedelia and 80s synths dives off a cliff, bounces off many ledges and sticking out stones on the way down and after landing takes a corner or three along the way before climbing back up to start things all over again. Swim Deep even pretends to be a hey-ho band in 'Heavenly Moments' without any new folk in sight. Intriguing, isn't it?

What to make of a band that has a singer like Damon Albarn, who likes a Blur and a Bowie melody every once in a while, has a pop feel, but does a lot of its music synthetically? It seems the answer is to enjoy it while it lasts. Swim Deep doesn't make the sort of music that I would start my day with nor end it with. And still it is quite alright.

'One Great Song And I Could Change The World'. The title of the first song of the album has some pretensions. I recognize some Smash Mouth disco pop, some Stone Roses in the flatness of the singing and the mellow rhythm. A whole truckload of other references comes by and all in this one song. But, what does 'One Great Song And I Could Change The World' really do with me? For one it puts me in a mellow mood. How long ago is it that Bros scored its few hits or EMF? All songs that are somewhere between love and hate, hate and love. The music of Swim Deep is somewhere up there too, although the music is mostly more soft and relaxed. When the guitar(?) does go off in the end of 'To My Brother' the soothing "ssshh" is quite telling. Only to start 'Green Conduit' as a folk song. Why not? Swim Deep, not even three full songs into Mothers, doesn't surprise any more. I am beyond surprise by then as anything goes within its own context.

Swim Deep is a five piece band from Birmingham in the U.K. and Mothers is the band's second album after 'Where The Heaven Are We' (2013). The high voice of singer Austin Williams is what is the common factor in all songs. Further it becomes clear that the band has two faces. One is a more regular band with a guitar, bass an drums, the other is that all band members do things on keyboards and synthesizers. Several songs are totally driven by synths, although a drum may kick in at some point to create some weight against the fleeting sounds.

Single 'Namaste' is a disco driven song that I do not mind skipping. The late 80s pop from the U.K. comes forward in a too slick way to my taste, that keyboard: taa  taaa. The drums are so straight and to the point that I'm totally turned off here. Rick Astley? Even he most have a new generation of followers by now. Compare that to the Air sounding, bass driven 'Imagination', which is a great song. The end of the album is an all out floor stomper. 'Fueiho Boogie' puts on a full tempo and can be changed into a dance song with ease, which happens at the end of the song. "We're In The House Of Fun" indeed.

Swim Deep skates on very thin ice. Some of its songs has a depth that make me take the chance to go under without a worry in the world, while a song like 'Is There anybody Out There' will never ever make me want to come close. 80s pop all over again.

You can listen to 'Grand affection' here: