Anthems For Doomed Youth. The Libertines 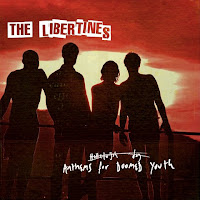 Comebacks are of the stuff that make up discussions that will never be settled in a satisfactory way. One fan is happy that his favourites are back together and/or releasing new work, others say that it will never be the same like it was before. The most sensible to me is listen to what is on offer and deduce whether it is worthwhile to listen to or not.

The Libertines have been playing together again for some time so an album was a matter of time. The release of Anthems For Doomed Youth did not cause a lot of noise here in NL. Perhaps that was different in the UK. The album sort of was there all of a sudden and mostly ignored was my impression. Taking into account that UK bands are mostly ignored over here for decades, the ignoring part was not so strange.

The Libertines were never really my favourites over 10 years ago. I liked both albums, but not loved them. The production of Mick Jones of The Clash and Big Audio Dynamite fame brought The Libertines very close to basically The Clash. Punky with other influences all around mixed with junkie chic and a way of singing that suggested large quantities of alcohol all of the time. Oh, I had my favourites among the songs, so once I found out that Anthems For Doomed Youth was there I started listening and was largely disappointed.

That was not the end of the record though. It slowly crept up on me. Several songs started to attach themselves to me and I found myself starting to whistle and even sing along to them. Something that no song of either Barat or Doherty solo ever has done. The richness of these songs slowly revealed themselves to me. What I started to find out was that the songs of The Libertines were so much less one dimensional. All sort of subtleties and emotions crept up making Anthems For Doomed Youth more and more an experience to listen to.

Leaving Mick Jones behind as producer allows the band to let in other influences that go well beyond The Clash. The Kinks come in and even a little The Beatles is lurking in the background. Next to that the members all are over ten years older, so have more experience and different tastes than back then. The title song and a song like 'You're My Waterloo' take the foot of the gas, after an opening set of songs that remind most of what went before in a pleasing way. The difference with then is the laidbackness and the daring to truly open up musically. That the pure music seems to be enough and the band has the courage and confidence to leave it at that.

One of the highlights of Anthems For Doomed Youth is 'Iceman'. A song that starts with a broom rush sound, suggesting waves, with just a ragged acoustic guitar following up. Ray Davies is so close here. The lyrics set a scene, suggesting an environment where the song takes place. 'Iceman' step by step expands into a bigger song as more instruments fall in one by one. Without losing its subtlety. Now I doubt whether I would let my child near this Iceman, but that is another story.

The album works itself towards an end. As always there comes a moment that I have heard enough The Libertines. There is some uniformity in the whole that makes me turn away again, but in the meantime I have listened quite often to Anthems For Doomed Youth in the past weeks and will keep doing so is my guess. In the meantime I enjoy 'The Milkman's Horse', another one of these great reminiscing songs.

My overall conclusion is a simple one. Having listened to several of the solo or substitute bands in the past ten years, these lads cannot do without each other. The Libertines is what makes them go and reach for great heights. Hopefully they see that themselves now also.

You can listen to 'Anthems For Doomed Youth' here: