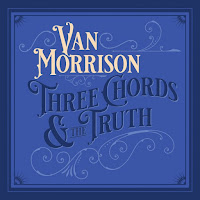 Yes, Van Morrison returns once more to these pages. To my surprise his new album landed on my doormat, from an undisclosed source. Thank you, however you are. So I put Three Chords & The Truth into my player and, as somehow often happens, Van Morrison tickled my good side in music.

Arguably Van Morrison makes the same record for say 40 years. I know, this is somewhat overstated, but it can't be denied that I do not need to have all of his records, let's say from 1987 onwards. 'No Method, No Guru, No Teacher' is the last one I bought.

Every once in a while an album comes by that seems just a little more alive and inspired and Three Chords & The Truth certainly counts here. 'March Winds In February' has this little edge in which the acoustic guitar plays a large role. The song made me interested to listen further and I was not disappointed.

Van Morrison started for me with the Them single 'Gloria' somewhere in the 70s and the Them track 'How Long, Baby' that I taped from some radio show. A great, bluesy song with its high sounding organ. The tape disintegrated years ago I suppose. Solo, my first album was 'Beautiful Vision', that got some airplay at the time with 'Cleaning Windows'. My favourite became 'Inarticulate Speech Of The Heart', with its soft Celtic influences. The live show in Rotterdam led to nothing but confusion on stage, a highly irritated Morrison trying to get the sound or the mix right, then seemed to give up, to return for a messy 'Gloria' in the encore, only to storm off and stop the show within an hour. On record for me it never got better. And no, I do not much care for his masterpieces 'Astral Weeks' and 'Moondance'. Too jazzy for me.

On Three Chords & The Truth Morrison mixes his jazzy sound with soft rock and blues. With some skating on the edge of the abyss of plagiarism where singing melodies are concerned. The organ soothes things in the background, soft drumming and an intricate play between piano, guitars and organ that alternate for a few notes up front. All fits intricately while remaining very delicate. Over it the, always, stained sounding voice of Van Morrison sounds; despite the fact it is evident he is singing with ease. Together it simply makes for some very fine listening. 14 Songs long Morrison shares his musicality with his audience at the best of his abilities and simply guarantees a certain level of musicianship. The band he has gathered around him simply plays fantastic. It all seems so easy to do. As if I only needed to join in and it would still sound this good. Knowing Van Morrison's obsession with perfection, it will be quite the opposite.

So, summing up, yes, I was surprised by Three Chords & The Truth. The album has a certain sense of urgency hidden in that laidback jazzy music, an urgency that made me pay attention. This is simply a fine album.