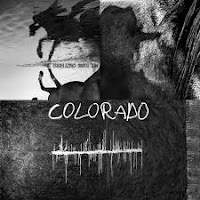 Four grey(ing) men, who met 50 years ago or short after. Two played in a band called Crazy Horse with guitarist Danny Whitten and were asked to become the support band of Neil Young who had left the smouldering ashes of Buffalo Springfield but had also joined Crosby, Stills & Nash, first on stage and then on record, 'Déja Vu'.

Neil Young and Crazy Horse debuted in 1969 with the epic 'Everybody Knows This Is Nowhere'. Off and on the band recorded through the decades with the just as epic 'Psychedelic Pill' as end of the road in 2012 or so it appeared. Tons of Neil Young releases followed, new and live releases from the years back, but not one with his first live band. And now, fifty years after that first record, here's Colorado, with Nils Lofgren on guitar replacing Frank Sampedro. Lofgren had played with Young somewhere in the early to mid 70s and in the last decades first replaced Steve van Zandt in Bruce Springsteen's E Street Band and now plays with Van Zandt there as well.

So a new Crazy Horse album. That makes my ears expectantly attuned to epic guitar songs with Young going at it for minutes on end. So I am totally surprised the album opens with an acoustic country ditty called 'Think Of Me'. The kind of song Neil Young has written dozens of in his career, yet never fails to touch me some how.

The electric guitars open up on 'She Showed Me Love', a 13 and a half minute guitar exercise. That typical dark sound Neil Young can conjure from his gear. Live you can see him pushing in one stomp pedal after the other to finally arrive at his signature sound. Of course 'She Showed Me Love' is a boring affair looked at from great height and indifferent to who Neil Young is. Who dares to repeat that single title sentence over and over a hundred times and in the meantime just producing a few guitar notes while the band plods onwards? Neil Young does and somehow never bores me, where all other artists or bands most likely would. This is who Neil Young is, also.

Another side is Neil Young's voice. Truckloads of people start yelling bloody murder within the first few seconds he opens his mouth. Take 'Olden Days'. In a delicate song where Young and Lofgren play beautiful guitar melodies off each other, the singer goes in search of the highest notes his career-worn voice can muster. A smart move? Not if this were the start of his career. At 74 Neil Young is not afraid to show some frailty. Slowly moving into the winter of his career, he stands his ground. Firmly, I can even add.

As I have already written in all reviews I wrote on the man on this blog and there are some and then a few, I have stopped buying his records a long time ago. I have enough Neil Young records in my house to last me a lifetime and still, nearly all albums I've reviewed are better than I ever expected. When I stopped buying them they were not (so) good as these albums are. Take 'Help Me Lose My Mind' on this album. Again an elementary song with the two guitarist playing while Ralph Molina and Billy Talbot create lots of noise in the background. The song is as ramshackle as they come, dark and murky, perhaps even unfinished to some ears, yet it works, completely.

When all is said and done Colorado is a repeating exercise. Neil Young and Crazy Horse have made albums like Colorado before, some even much better and there certainly is no 'Like A Hurricane' on the album. But then I hear the delicate and frail 'Green To Blue' and I can't help being impressed. If pressed I would trade almost all my 80s Neil Young albums for this one. It is so much better than 'Trans' or 'Old Ways'.

Neil Young is many things in his career and successful at these different sides. One of these sides is that he is a master of the mid-tempo rock song. Those dark, slow rockers, where his voice and murky guitar sounds come forward in a great way. Colorado is such an album, with a few surprises on both edges of the album. So once again I arrive to the conclusion Neil Young remains in great form and is growing old extremely gracefully with all the rugged edges that come with that grace.