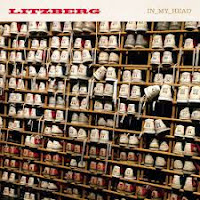 All lovers of alternative pop-rock should be on alert from this moment onwards. With In_My_Head The Netherlands has another fine, fine album in that sector to share with the world. Litzberg is a new band fronted by a veteran of alternative pop music, Mathijs Peeters.

With his previous band Reiger Peeters has featured on this blog twice over the past few years, with as many reviews of live shows to accompany the EPs. On the limited length albums the music does not so much differ from what is on offer on In_My_Head. In fact several of the songs will sound immediately familiar to the Reiger fan.

What the reason for this change of name is, I can't tell. What I have noticed is that the level of attention this album receives lies a few notches up and it is followed by a tour, where the previous band always seemed to be in support of someone else.

So what ever the reason is, the attention for In_My_Head is totally deserved. Mathijs Peeters knows how to write a great song and how to make it special through the arrangements within those songs. The result is an album that sparkles. From the very first notes a statement is made. The albums opens with the characteristic 'Calm Down'. The guitars lead the way. Rhythm and lead weave in and out of each other. The tight rhythm leads it on. The melody does the rest, not forgetting the dirty sounding guitar solo. The melodies within the song seem to come from everywhere, making 'Calm Down' a pleasure to listen to.

When 'Never Forget' has a secretly hidden country touch within it I prick up my ears again. The way the song explodes and derails at the end is masterfully done. 'Tapes' moves into QOTSA territory without losing a single stroke of Litzberg's own signature. (I'm skipping 'Hollow Man' as I already raved about the song not too long ago.) 'Try again', a live fave with Reiger, goes way off into The Velvet Underground territory. 'Stories' is a beautiful, yet dark and brooding ballad in Neil Young's territory. As you just read, the result is that, apart from the quality of the songs, the album shows a great variation between the songs, while remaining just as good but more interesting.

In_My_Head slowly but surely turns into a musical feast. Yes, I know, I rave a lot about Dutch bands the last couple of years. Are they really that good?, you may ask. There's only one way to find out: listen to them yourself. My answer is yes, they are. Litzberg is another addition to that list. A band to be on the look out for. You will hear many influences seeping through but all songs are interesting in their own right. I will sure be around when the band comes playing in the neighbourhood somewhere in the near future.

You can purchase In_My_Head here:

for the price of your desire. Support your artists though!