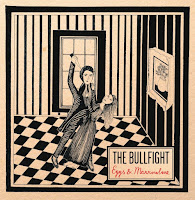 Having been away for a few days, a package was delivered at the neighbours. Knowing what was in it, it was already exciting to unpack it. From it came an LP, a cd and a book. The murder project by Rotterdam band The Bullfight, who debuted on these pages with its previous album 'Whisper In The Dark For Me'.

An LP, so I put it on immediately on the LP required speed of 33 RPM. My girlfriend and I were captured immediately by the immense beauty of it all. But in the second song the singing was totally off. For one song I could accept it as a special, dark effect of the dark theme of the album. In the third song, the second with this over slow, weird voice I started to get suspicious. The music was so extremely beautiful though that I was almost willing to accept the weird turn of voice.

As there also was a cd with the album, I decided to put that on as a test. And yes folks, this is an LP to be played on 45 RPM.

One thing did not changed, I remained totally impressed by the music of The Bullfight. Eggs & Marrowbone is an album of intense beauty. It has a mood of its own, which is just as well. The project is ambitious and this is reflected in the music and the artwork. As this is a blog on music I will, mostly, comment on that.

Musically Eggs & Marrowbone reminds me of Leiden band The Stream, through the singing and the concept of the whole. Where influences are concerned I tend to think in the direction of Tom Waits and Nick Cave. Yet it all stops there as well. Because of the soft violins that underscore most of the songs the album takes on its own guise. Soft drums, a bass guitar and a guitar or piano do the rest. Together the musicians produce intricate music, let's call it chamber pop, that begs and craves listening. The voice of singer Nick Verhoeven remains itself, i.e. slightly odd in sound and use. It has to do with his way of singing, affected and almost speaking more than singing, totally his own in other words. Those words are all on blood, guts, knifings and shootings. I'm playing and writing on an album on murder, remember.

Several people have helped The Bullfight out on Eggs & Marrowbone, the most famous being actress and singer Birgit Schuurman. The female voices mostly come out in the murder cover ballads. The jazzy tunes of old get a replay, recorded like it is 1930 and not 2019. It gives the album an attractive accent, something totally unexpected even. A fun element somehow adding to the authenticity of Eggs & Marrowbone. Yes, old-fashioned jazz can be heard here, horns and all, oh so lazy and Charleston style as well.

Why? Murder ballads are a thing from the past. Nowadays there are murder raps but murder ballads are no longer on the musical menu. That The Bullfight has taken that path, like e.g. Nick Cave did circa 20 years ago, is exceptional. That it decided to get involved in a whole project including a full book artwork, is even more ambitious. Musically the project has totally succeeded. To come back to the book, 'The Art of the Murder Ballad'. 100 Artists were asked to contribute to the theme "murder ballad" and did. It is a beautiful addition to the record and vice versa. As a whole it is pretty amazing. A project that was in the works for several years has come to a beautiful fruition.

For those deciding fast, The Bullfight plays three shows this weekend: http://www.thebullfight.nl/tour (and beyond). The original artwork from the book is on display at Donner in Rotterdam.

You can order Eggs & Marrowbone here: