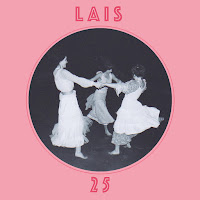 In 1300 a product like the one discussed here was inconceivable. Three young women dancing like they do in this picture was not. Even at least a part of the music may not have sounded completely out of sync at a court or a farmer's wedding at the time. Songs that stir up emotions of elation and lament, of joy and reminiscence for things to come and things remembered.

Laïs is 25 and looks back on its career of a quarter century. So much has changed since 1994, the year Kurt Cobain died, the first people went online and neo-liberalism was becoming the norm in the western world, while Yugoslavia had started to fall apart. Just to mention a few things happening when Jorunn Bauweraerts, Annelies Brosens and Soetkin Collier (later replaced by Nathalie Delcroix) met each other at a festival and decided to start singing together there and then. A decision that clearly was and is an extremely good idea.

To me 25 is an introduction. I had heard of Laïs but the description of the music on offer never got me beyond reading a review through the years. Things changed when I received the digital album and as I try to do with each one, give it a try. Musically I was reminded instantly of the only song I know by Kate and Anna McGarrigle, 'Complainte Pour Ste. Catharine'. A song that sounds like nails on a blackboard, due to the voices of the two ladies.

How different Laïs is. The voices blend beautifully together over music that I have come to appreciate with the passing years. The teenager I once was could not deal with the McGarricles. The slowly ageing man I am appreciates 25 the more. What strikes me is the richness of the music of the trio.

From extremely traditional folk, like I wrote in the first lines, Laïs is not afraid to show a more alternative side as in e.g. 'Joskessong'. It also switches as easily between Dutch, French and English. In either language obviously comfortable. "Marie Madelene' is in French and starts out as a folk song, but slowly but surely the song gets more solid, verging on rock with an Arabic sounding solo. So once again I get surprised by a turn the album takes.

Being a compilation album and not knowing the original albums the songs come from, I can only surmise to be hearing the evolution Laïs has gone through in the past 25 years. If so, it is impressive. The young girls who started to sing together in 1994 will not have had a picture in their minds of what I am hearing. What they must have heard is the beauty in their blending voices, the reason they continued singing together in the first place. The atmospheric music behind the voices gives the voices something extra.

As I already said the traditional folk I associated Laïs with in the past is only one side to the trio, perhaps even just a starting point. In the folk Laïs manages to reach a level I know from my youth, e.g. Steeleye Span or "The day we went to Bangor" song, whatever it was called. It is in the songs where it leaves tradition behind that Laïs soars to great heights. Where it surprised me and really won me over. It seems like I have some catching up to do.