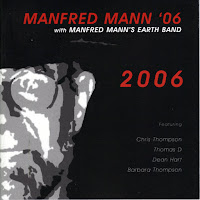 There's a whole stack of MP3 album collection cds in my home, with hundreds of not thousands of hardly or never played records on them. Let's say that the source in part is disreputable, but at the time the day my government stated that is was legal to download, so I did for a few years and stopped when that interpretation of law was revoked. Downloading didn't stop me from buying records. I even bought several albums I never would have otherwise.

All these unplayed digital records. I decided a while back to start playing these cds in the car and see what comes by. One of those cds opened with music that sounded faintly familiar, not known. After I stopped, I had the opportunity to check what I was hearing and it turned out to be '2006', a solo album by Manfred Mann from 2004. I know the band still existed, as I see them come by on live adds every few years. The music even sounded quite o.k.

When did I stop listening to Manfred Mann's Earth Band? Probably in the first half of the 80s. 'Watch' may be my last album. I would have to check.

It brought me into thinking what a fairly strange career Manfred Mann has had. Born in 1940 in Johannesburg in South Africa as Manfred Lubowitz, he turned 79 in October. In the early 60s he started the band Manfred Mann. The first noticeable thing is that the band is named after Mann, while he is not the singer, nor does he write the songs. Yet all his bands carry his name. It's not unique, as Spencer Davies was around as well, but who has heard anything from him since 1967?

Coming from the same London rhythm & blues scene as most London based bands from the early 60s, the band started scoring hits with lightweight pop songs like 'Doo Wah Diddy' and 'Pretty Flamingo'. In the second half of the 60s the songs became more serious and the band discovered Bob Dylan's treasure trove of the Basement Tapes, then songs on offer for covering. The NL 1967 number one hit 'Ha! Ha! Said The Clown' was the band's biggest hit over here, but 1968s 'Mighty Quinn' scored big as well. There were a few more minor hits and that was the end of Manfred Mann. 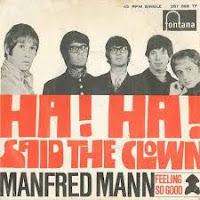 Looking back over 50 years 'Ha! Ha! Said The Clown' was a strange hit in those days where hippies and psychedelia ruled. On the other hand it stands out as the music sets it totally apart from other bands and hits of the day. Being very small at the time I remember thinking that "Said" was the name of the clown and the slight feeling of disappointment when I found out what "said" means. 'Mighty Quinn' is one of my first 45s. I can't remember when and where I bought it, but it must have been a discount somewhere in the earliest 70s.

In the mid 70s Manfred Manns Earth Band surfaced as a minor but regular hit machine. Most noticeably with Bruce Springsteen songs, 'Blinded By The Light' and 'Spirits In The Night'. My favourite remains 'Davy's On The Road Again' and its b-side 'Bouillabaisse'. The albums coming with them all found there way into my home in the early 80s. The hits ended with 'Lies (All Through The 80s)' in 1980. Like my interest in the band stopped with the album 'Chance'. 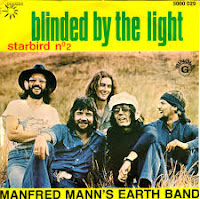 Currently I am happy hearing one of the singles on the radio every once in a while. I bought a compilation album of the second Manfred Mann iteration circa 15 years, so with Mike d'Abo as singer, replacing Paul Jones, but I have to say the music of the band not truly stood the test of time. It is dated and in part fine as a memory but not more. I won't even go into the first singles of the band. Teenybopper music at best. The more symphonic Earth Band fairs better here. Coincidentally 'Blinded By The Light' came by on the radio today and it holds its ground easily. There's so much power in the song mixed with a little mystery. The song stands out in between what is considered pop music today. The same goes for the already mentioned 'Davy's On The Road Again', arguably the band's best song.

It is the change in music Manfred Mann made that makes his career remarkable. Not many artists go through such profound changes. Mann and his, ever changing, bandmates did. The prolific output of albums in the 60s and 70s was standard those days, only matched by the likes of Ty Segall today. The difference is Manfred Mann('s Earth Band) was a semi-top band in the 60s to early 80s, where Segall is active in the margins of rock music.

So come '2006'. After some googling, it proves to be his second solo album. As I said, I knew nothing of the album, except that the music sounded sort of familiar and was appealing enough to wonder who this is. (I often have no clue at all when playing these self-burned cds.) So if you once were a fan of Manfred Mann and have lost sight of his career, like I have, checking out '2006' can be worth your while. A lot of the music can be called progrock and yes, is dated in sound. Yet, the album has an urgency that surprises me in part. The progrock part may have been done before, Mann is not afraid to experiment as well. The result is a mix bunch of songs of which some are remarkably strong, just like I would expect from an artist who always found his rightful place in the semi-top of pop and symphonic rock of his day. Steadily plodding on, never disappointing. The opening song 'Demons and Dragons' pulled me into '2006' immediately and the rest does not let go. Exactly what music on an album should do.

You can listen to and buy 2006 and other music of the band here: