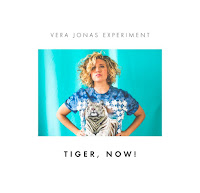 This spring another Jonas, Karen, featured on this blog with her new album 'Butter'. Come summer it is Vera who finds herself on these pages. The differences between the two Jonasses are more distinctive than the similarities, musicians and female. Vera Jonas rocks out in a fashionable way where Karen is more at home in the americana section. And Vera is from Hungary.

Tiger, Now! is an album that was released before. At the time it totally escaped my attention. This time it has not and I'm the better for it. Vera Jonas presents an interesting mix of music that does really well with the current summer temperatures. She not only rocks out, loudly, who moves down the album by the song discovers several surprises and changes of mood and music. So here's a similarity between 'Butter' and Tiger, Now! any way.

Vera Jonas Experiment is a band from Hungary, fronted by Vera Jonas. It released an album, 'The Game' in 2013 and an EP in 2014, 'Wanted'. And now this discothèque of musical styles. If anything Tiger, Now! seems like a graduation assignment. Show the graduation committee you are able to ... And out come these different tasks, all fulfilled with great dedication and love for the musical style and genre.

Had that been the whole story to Vera Jonas Experiment's latest album, then I good have served a short shrift here (which I would not have done, just ignored the album). No matter what the genre is this band takes on, it serves a great sound, an even better song and I am sure at the best of its ability. Even the song sung in Hungarian, gets a special treatment. 'Szel Hozott, Szel Visz El', which means "The wind that has brought me here, will take me away" (thank you Lyricstranslate.com), is kept very small and stands out just by Vera Jonas' voice. Until the band kicks in and finishes the song in a grand, impressive way.

Not so at the start of the album. Jonas mixes her impressive voice with a huge guitar sound and is not afraid to take the band full on. Only to come out winning. Vera Jonas has a powerful, yet pleasant voice and shows it to the world straight away in the driving title song of the album. The beat is relentless, yet almost one dimensional. Think 'I Love Rock And Roll' with more vocal melody. Vera Jonas Experience manages to keep a song interesting which at heart is only a pounding rhythm of all involved instruments and a guitar that goes apeshit every once in a while.

Straight afterwards the band moves into something extremely melodic, still rock, certainly, but the ballad kind of rock. 'Ordinary' is the kind of ballad that rocks out, explodes. From there Tiger, Now! starts to explore many directions. Even the Suzanne Vega style folk comes by in a more modern, solid way that is. There's so much to enjoy, discover and recognise on Tiger, Now!. So many moments of joy, exultation and contemplation. Vera Jonas Experience may just be given it's all. Putting Experience behind your name, comes with quite a legacy and is dangerous to do. In this case, the only conclusion can be that listeing to this album is a true experience and a satisfying as well.

Speaking of curiosities. The cover of the Beatles' 'Michelle' certainly counts as one. Almost a late night jazz standard is what the 1966 no. 1 hit is turned into here. It does show what the Beatles got away with through the years. (Drool, drool.) 'Michelle' is one of the band's biggest hits over here. Everybody liked it. Those are the biggest hits.

As far as I'm aware, up to today I have only heard music from Hungary by a The Beatles cover band, singing English and hardly speaking it, The Blackbirds? All the other news from the country is often set in a negative connotation concerning immigration and the rule of law. Today this changes with this beautiful and extremely varied album by Vera Jonas Experience.