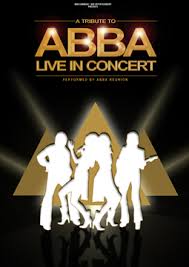 The announcement of two new songs to accompany a hologram tour of their younger selves to be released in December, stirred the international media into action alright. The songs themselves can only be a disappointment, most likely that is. The news said something else between the lines: ABBA is big business, that is nothing new, no, ABBA is at a height where it rightfully belongs: up there with the Beatles.

ABBA is, mostly, a phenomenon of the 70s. Camp, disco, ballads, but even then it was hard to ignore that some of these songs were, really, good. Millions of people weren't wrong. My ears and level of acceptation were. As a teenager liking Bowie, Pink Floyd, Nazareth and all the 60s heroes and later in the decade discovering Zappa, U.K. new wave, etc., there's just no place for disco and ABBA.

Over the years, ABBA had long quit being active, most of these songs just kept presenting themselves. The highlight, my personal one that is, was an unexpected encounter at a conference party in Brussels a few years back, with an ABBA look-a-like/tribute band. Each and every song worked, was shouted along to by all present and so danceable. My 50 something ears knew exactly what they were hearing. Not that I raced to the shops to get the albums. (Read on here: http://wonomagazine.blogspot.com/2016/06/abba-revisited-at-eurodig-brussels.html)

My son already had succumbed to ABBA as a pre-teen. He had the greatest hits cd I bought him, so I had a copy of my favourites made at the time. Because of the tapes I made for him in the car with his favourite songs, ABBA came by regularly through the years.

And talking about hits, there are so many of them. In fact when I go into my 45 collection I found a few singles I bought in discount, 'Summer Night City', Eagle', 'Take A Chance On Me'. Looking at that list, what shows through most is how diverse they are. That is what ABBA has in common with the Beatles (and roughly the limited length of their careers). ABBA had songs for everyone, making people patient when a song was less to their liking, because the next one will be again. The Baroque pop style of 'Waterloo' and 'Dancing Queen' with their lush piano riffs, the flat disco of 'Voulez-Vous', the many ballads like 'Fernando', the exotic in 'Chiquitita, the serious pop of 'Eagle', 'One of Us' and above all 'The Day Before You Came' or the rock of 'Does Your Mother Know' and rock disco of 'Summernight City. It all attests to the diversity of this band and one of the main reasons for its prolonged success.

After reading the mea culpa of 'Oor', earlier this month, on how they mostly ignored the band all through the 70s, and yes, 'Oor' wasn't there to cater to this sort of music: It went punk in 1977 and new wave soon after (and became so dogmatic at it that even I got tired of reading about the "Medium Mediums" and how good they were, which they weren't) I knew that things had settled in the universe. ABBA has finally gotten its right station. Even if you do not like the music, there's no denying that.

So back to last night. I had recorded the Live In Concert show for my girlfriend around New Year's Eve and we hadn't watched it yet. She was a fan in the 70s and still is. The film itself was a bit strange (or perhaps this TV edit, I don't know) of footage of the band on tour in the U.S. and the show from the Wembley Arena in the U.K. Although I had the impression to be watching a few different shows. I had never before seen ABBA in action. A few things stood out.

Yes, the girls were pretty, there's simply no denying. Also that they look like women do. There was nothing there added to who they were except for a training program, make up and a blow wave or two. The two voices of Agnetha and Frida blend so perfectly together, creating the layered vocals that ABBA excels in. Björn is the most rockstar of the four. He really enjoys himself on stage and goes full out, where the ladies are much more reserved. The same goes for Benny, being hampered by his piano of course, still wants to have a good time and enjoy himself. Behind the four was a huge band doing all the work, which is fine. The four need a band to recreate what they make in the studio. I did wonder whether Agnetha and Frida always liked what they were singing. They were served music and lyrics to sing. Musically the band consisted of the two BBs. The nice front presented the results to the outside world. There's no telling what they really thought.

And above all, yes I liked watching the show. The music was good. Yes, GOOD! The presentation great and focused on the music. There's nothing being taken away from that. The single naughty, seductive glance into the camera by Agnetha, the girls smothering the guitar player while soloing (sexual harassment of an employee if I ever saw one) and Frida's ballet lessons of old recreated during a solo was all there was really to note. It was Björn who kept jumping around given half the chance. His role as guitar player was minimal anyway, as the band had to very competent players in it.

No, I will not go to the hologram tour next year. Yet I am sure though that for those who will, "a splendid time is guaranteed for all",  to quote that other very famous band of old.