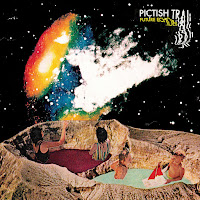 Whether all is well in this future remains to be seen. Chances are not that good. The busy and rather strange cover art of Future Echoes gives off a signal. I am just not certain what it is and whether I want to be part of the picture.

What I am warming to though is the music of Pictish Trail. At first I was simply overwhelmed by the sheer size of the music. Two fully filled cds, with music that at first listen seems to lack consistency in many ways. Slowly but surely the album found its way to me and step by step finds itself in full action, as good albums should.

Pictish Trail is Scotsman Johnny Lynch and Future Echoes is the double vinyl re-release of an album first released in 2016. The second album is filled with extras like remixes, live versions, etc. As I haven't heard Future Echoes before I will stick to the original album and share my views with you.

If one influence shines through on this album, it James Mercer's. Also a man who works mostly on his own behind a band name, The Shins. Part is in the way of singing. The music deviates more, but I can imagine The Shins playing most of these songs. Future Echoes is an album that is dreamy by nature and full of influences spanning several decades. For those with a clear ear, it is even possible to distil 'Cloudbursting''s violin part, Kate Bush's 1985 hit song. Pictish Trail leans a lot on electronics and electronic rhythms. A lot of this music may have been created by Johnny Lynch on his laptop. This takes nothing away from the fun I have with Future Echoes.

In fact, you do not hear me complain at all. There are never enough albums with a great alternative pop feel - when they are good that is. The more I've listened to Pictish Trail I am convinced that 'good' is the right description for this album.

There are hints at psychedelia in Future Echoes. This is where it is left at. There are enough latter day psychedelic albums to last me for a while. Pictish Trail weaves some psychedelia through the fabric of its songs, containing so much more. With his light, slighter higher voice, Lynch always sets the pace and mood. Dreamy, as if looking into a far off future. How the mood can change within a song with just a few 'ooohs' is shown in the superb 'Until Now'. An acoustic guitar lends a hand, as does all sorts of electronic, small musical jokes.

It can be said that the over all mood of Future Echoes is almost flat. That is what kept me from the album for a while. The richness of the album opened itself over time. In such a way that I understand now why Future Echoes was nominated as best Scottish record of 2016. In fact I may even have supported it, knowing what I know now. (Had I been asked that is.) There are so many small details to discover that I am certain I am not at the end of that development yet.

My advice to you is to take a little time for yourself and Pictish Trail and listen to what an oh so small song like 'Strange Sun' has to offer. A ton and then some more you will find.

You can listen to and buy Future Echoes here: