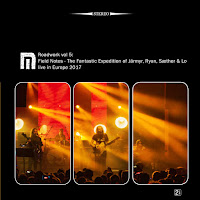 Last year I reviewed Motorpsycho's latest studio album, 'The Tower', favourably. What?, it made my top 10 of 2017. In April I saw the band for the first time in over a decade live in Alkmaar. And now there is the latest iteration of the the band's roadworks.

For me this is the first one I'm listening to. It catches the band live in Europe in 2017. Roadwork vol 5 catches Motorpsycho in its full glory. The band rocks out in a most enthusiastic way. Exploring its compositions to the max. Something they have done in the studio as well with the more lengthy ones. This does not mean that they have reached their final version per se. Motorpsycho goes at it like jazz musicians. There is a central motif where the individual musicians depart from, in the case of Motorpsycho usually including lyrics, after which the song takes off in lengthy solo's, where guitar and bass battle things out between them. Behind them the drums go at it, so keeping time is a huge challenge for all four musicians. The fourth being the guest guitarist and keyboardist on stage -who gets his moments as you can hear here.

Seeing Motorpsycho live and having to listen to an experiment of 24 minutes at home are two different things. Like I notice that both the singers are not the best of singers on a live record. I do not think I have to listen often to 'Lacuna/Sunrise' at home. Fans of Frank Zappa will recognise some of the sequences in this long piece, as being Zappa influenced. Having said that, it is at the same time great to be able to follow every twist the four musicians take here, at leisure and not the spur of the moment. The original song from the 'Here Be Monsters' album is extended by a whole 15 minutes. Long spacey interludes our followed by more solid rock parts and eerie keyboard solos. That certainly is the added value of Roadwork vol 5. The reason why this album adds to the regular releases.

In the past I liked the more structured songs of Motorpsycho better. This has changed over the years, although I'll admit it is hard to concentrate for 24 and a half minute on a jam, with life going on around me. This sort of stops being present at a show. (I know, with modern media this is a tough choice.)

Roadwork vol 5 shows the world how varied Motorpsycho is. The dreamy 'Manmower' from the album 'Blissard' (1996) makes for a beautiful piece of work that is slowly flashed out from the introspective beginning. The keyboard, the Mellotron all join beautifully. The bass is fuzzed up and off we go, with still about 10 minutes to go. Dynamics are used by the band creating extreme mood swings. The jazzy guitar solo makes it another song again.

Roadwork vol 5 is filled to the brink of Motorpsycho and still does not do right to the hours long shows the band gives. There's so much more! It does do right to what Motorpsycho is on stage. A powerhouse of a band that is an expert in finding many different approaches to its own music and music in general. A band that does not fear to take off and find out where it will land on its feat and perhaps it will not. Who knows even that may happen once in a while. Fans of the live version will enjoy this album tremendously. It holds it all. For all others: this is the real thing where Motorpsycho is concerned. Listening to the records is only half the story, musically.

You can buy Roadwork vol 5 here at Stickman records: