Once The Sun. Helge 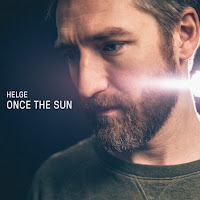 Helge is from Amsterdam by way of Utrecht and has released his solo debut album only in 2017. It is early summer 2018 and already the world can enjoy a follow up EP. A man on a mission.

It is said that Once The Sun shows another side of Helge, as he let's in more electronics into his singer-songwriter music. Be that as it may. As I'm not familiar with 'The Days Of Young Petty Davis' nor the three albums he released with his band Miss Molly & Me, I'm all fresh ears where Helge is concerned. Be that as it may. This certainly does not go for the music he presents on Once The Sun. The train filled with singer-songwriters who let in some modern influences passes at full speed, yet Helge managed to hook up his own car to it.

The world is the richer for it. The five songs on Once The Sun all have an inherent quality that is hard to ignore. Whether Helge strips away every layer Blaudzun adds to the basis of his songs, like in 'Gotta Let Go' or an acoustic foray into the acoustic side of Ed Sheeran, like 'On Your Mind', Helge Slikker comes out a winner. All songs have something distinctive, something making them worthwhile to explore more in depth to find the diamonds and pearls hidden within them.

It is almost too easy to put Once The Sun aside as yet another record by a man with a high, delicate voice. I almost did so after a first shallow listening session. A narrow escape it was to. Lucky for me and Helge I nearly always give a record more than one chance. The second listen session already opened me up to Once The Sun and put the album on the level of e.g. Low Roar, James Bay and Novo Amor, to name three (fairly) recent examples of singer-songwriters with high sounding voices on this blog. Soon after Once The Sun went into a sphere of its own, somewhere up there where Blaudzun is.

The album starts with 'Let's Be Gone', the single. Delicately, yet with firm but rhythmically plucked strings, the song opens the album. There's no easiness in this song. The rhythm keeps stop-starting. Over it Helge sings with his high song. A piano is allowed in to provide (only) a few melodic notes. It is important to grasp the mood of 'Let's Be Gone'. Do that and you've found your way into this EP.

A muted rhythm guitar starts 'We Know Now'. We know that muting trick now. Yet this song is different from 'Let's Be Gone'. A lot sounds familiar, for sure. To my ears this is the most ordinary song of Once The Sun. That may tell you something.

The title song takes the EP in another direction. A The Beach Boys like ballad. Like 'Tears In The Morning'. The voice(s) and sounds are more modern, making the song 2018. The slow piano and guitar notes, to modest to be called a solo, more an interlude lifting the song tremendously high. The song has a chord progression that could be Oasis' (and Blaudzun's) yet nothing in the song has to do with either. 'Once The Sun' is one of those songs that tell me how music can equal beauty.

With 'Gotta Let Go' the tempo goes up, the voice goes down, taking the EP again into a different direction. "We all have are demons ... and feelings", a truth like a cow as we Dutch say. When they are translated into a song like 'Gotta Let Go' I wish them upon more musicians. The darkness seeps out in the small interlude when the influence of Eels comes through and the song is deactivated instead of brought to a higher level. Well done and interesting this twist Helge presents is.

The ballad 'On Your Mind' ends it all, far too soon. You can name your own names here as influences. There are several. In playing and singing. That may be. This is a nice song that is taken off near the end, changing pace of the song and the album once again.

Helge's Once The Sun is an album to check out. Many familiar sounding elements, songs and sounds have melted into something interesting in its own right. Helge surprised me several times (with)in five songs and that is more than some artists can attest to in a whole career. As the quality matches the changes the only conclusion is: Once The Sun totally succeeds.