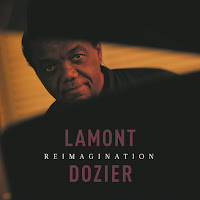 From 1964 onwards The Supremes and The Four Tops scored a string of hits that not only spelled huge success, but are nearly all hits right up to this day. Most of those songs have proven to stand the test of time and remain as much fun to hear as when I heard them for the first time. Most, if not all of these hits were written by a trio called Holland-Dozier-Holland. I never really found out much about them. By the time I had the money to buy records, all these hits had become childhood memories and some, especially the older ones, still needed to be discovered.

Dozier, the one always in the middle, is Lamont Dozier, now 78 years old. Recently he released an album called Reimagination. I was not interested. These songs have had their final version circa and over 50 years ago. So why come forward with new ones now?

I can think of a few reasons. The opportunity arose, but maybe more importantly to hear them sung in the voice by the man who co-wrote these songs. This was his chance to shine and not be a name beyond the limelight. I can't imagine money being one of them. It may cost more nowadays to make a well-produced album than it makes from sales. So ambition may have been the reason and it seems fair game to me.

By chance the album got played on my iPod. Forgetting my reading glasses equals hardly any idea what will be played. I heard the most sober version of the first lines of 'Baby Love' imaginable. Slow, empty, intense. The years of 'Baby Love' lie decades behind Lamont Dozier and the sound of his voice and singing tells all about his journey through life. I was intrigued immediately and listened on. No, I will not play this album often. If I want to hear these songs I will return to the originals for sure. What struck me was the integrity I heard.

The further I moved into the album the more guests and instruments came by leaving the voice / piano versions behind. Yet the effect of the album remains largely the same. Towards the end sobriety returns.

Reading up on Lamont Dozier I found he scored solo hits in the 70s (in the U.S.) and off and on scored hits, (co-)writing for others up to around 1990. If this album is his musical goodbye to the world, it is one you can only hope and wish for as a salute.