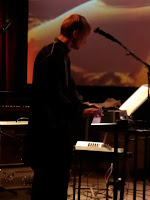 The cause of this article is Roeland Scherff, guitarist of Elenne May, who graduated at the Amsterdam conservatory last week, with a thesis called 'Melodic development in pop music'. He invited me to come to the Elenne May show accompanying his graduation as the band would be playing seven new songs. The invite opened me to three other acts as well, each with its own approach to music, with one common denominator: they were all extremely good in their own musical way and genre. The shows were showcases for the three graduates in pop music, of which one played a solo and a band show. Venue and the conservatory made sure each act was able to shine. And shine they did. 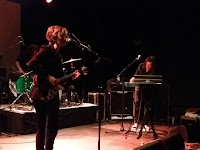 The first artist got on to the podium without an introduction (nor outroduction). A guitarplayer, keyboardist and drummer. From one of the latter two I came to understand that they played for this occasion to accompany Van der Waals. And that only for about two months and no idea whether this was a one off or not. Jasmine van der Waals sang in Dutch, singing somewhere between speaking and singing. The lyrics dealing with doubts, self-exploration and existance in general. When the show started I thought Aafke Romeijn is getting some serious followers and competition. That was only the starting point. Jasmine van der Waals' set just grew and grew, creating more atmosphere by the song and changing the atmosphere as well. Her wide guitar sound supported by electronics from the keyboard and (complex) rhythms. She is not the best singer and probably will be the first to admit that fact. It is what happens next that matters. In this she totally succeeds and convinces. 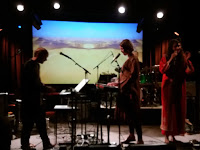 Elenne May set up shop next. With video projections and all running on a screen in the background. Undoubtedly a whole story is going to be told through the new songs. To really draw conclusions here it is far too early, as what the audience heard are preliminary versions of songs that may come out quite differently over time. Musically there is enough to tell. The songs are going to be different. Change starts with different instruments, more keyboards, less (bass)guitar. Even some electronics are involved. Several songs impressed straight away and two even more than that. Yes, it is exciting to listen to new songs of a favourite band for the first time. When the band shows progress in the way Elenne May was able to do, it is a pleasure and honour to be present at. Yes, this was new, but the band, including new matching Afghan outfits, was ready for this step as well. The new work was played with confidence and enthusiasm. For now I wish the band the best of luck with getting things exactly like they want it to become and am looking very much forward to hearing more in the future. 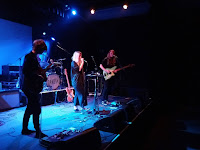 I wondered whether to go home early and am glad I didn't. Dakota was up next. (Thank you, Eveline!) With Jasmine van der Waals on guitar. She turned into a shred and reverb, or better large bathroom echo, meister. Four young women, totally at ease with their repertoire, playing a great set. Yes, my mind was shouting Warpaint the whole time and yet there was one difference. Not a small one either. With the exception of 'Love Is To Die', there isn't a single song that sticks in my mind, no matter how many times I play a Warpaint album. Dakota has that vibe down, totally, exactly and then it comes up with songs. Superb songs in fact, brought with enthusiasm, panache and humour. The band is recording a new album. Something to look out for alright. 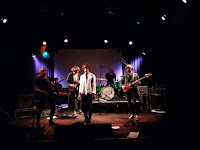 Now someone held a great secret for some twenty years, but Liam Gallagher is not the youngest of the Oasis brothers. No, he's 20 odd years younger and sings in Orange Skyline. It is quite some time ago that I witnessed a band stepping on stage with so much self-confidence, perhaps even too much so, and deliver 100% and more. The last band I saw doing something similar last April, Poncho, had the looks and attitude, but just not very good songs. Orange Skyline has. Yes, just like Oasis the whole musical history is shaken upside down to come up with a new song, but when they are as good as this, who cares. The lead guitarist also graduated that evening and presented his band. Somehow I managed to overlook this band as it has already had air time, radio and tv, and played support for Kensington in its Ziggo Dome show. Time to check out more soon. Not looking alike at all, the singer and guitarist are brothers as well.

A fine evening it was in Amsterdam's Q-Factory. As I have written time and again over the past years. This country has so many fantastic bands. I just got to know a few more.