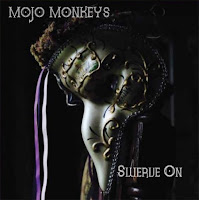 In a way this week is Beth Wimmer week on WoNoBlog. First we published on Olivia Rose's first EP. Olivia is the daughter of a friend of Beth's. Then we published on her new album 'Bookmark'. And here is our review of Swerve On.

Why you may ask? Mojo Monkeys' gitarist Billy Watts produced Bookmark and the band played on the album and will play at the release show in Liechtenstein later this month. Billy Watts plays with Beth in The Netherlands, Germany and Switzerland this month.

And so the request of Beth whether I would listen to Swerve On and give it a chance is explained.

Listening to 'Tuscaloosa Maybe' and 'Two Shots' truly made me wonder what I was listening to and made me fear for 'Bookmark'. Let me skip the songs here and there, because right after them a totally different world opened itself. Let me call it a world in which The Imperial Crowns would truly feel at home and so will their fans.

Mojo Monkeys does not tie itself into one hole and shows that it can convince in several genres. (Even the first two, yes.) From the ZZ Top like rockers to the dirty soul rock blues like The Imperial Crowns excels in and I hear a dirty form of country mixed with (soft) rock, like Dirty Sweet from San Diego played in the 00s. And somewhere through it all, there's that great band from Texas from the 80s, The Fabulous Thunderbirds.

Just listen to the title song. 'Swerve On' has a mix of genres that not a lot of bands pull off successfully, especially because Mojo Monkeys chose to keep the song small, towards a ballad, while keeping the country, the rock and the feeling parts in tact throughout the whole song. A fine song 'Swerve On' is.

So, yes indeed, there is not a lot of originality on Swerve On. But believe me, if you like this sort of music, a lot of sorts of music to express myself more correctly, you will not care a lot about that. As the songs are not only good, they invite you to listen to your favourite records of yesteryear that may have been gathering dust, get them out of their hiding place and put them on once again. Sir Douglas Quintet is there, including some Tex Mex 'Mendocino' style in 'Ride Your Pony' and mixed with The Imperial Crowns sleaze in 'Little Javelina', vocal style and all. CCR and The Red Devils minus its sadly departed singer/harmonica player too.

I think you know enough. It's too bad the band doesn't come out with Beth Wimmer to my country. My guess is roof raising shows when these men get down to it. The Swiss are a lucky bunch of people; if they go out to see them, that is.

You can listen to and buy Swerve On here: