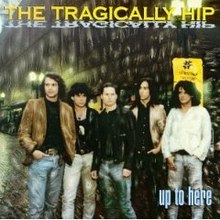 One of the most typical voices in rock music was silenced on 17 October. Yesterday morning the first song I heard on the radio after my girlfriend turned it on before she goes to work in the morning was 'New Orleans Is Sinking', my favourite song of The Tragically Hip. Gordon Downie had died, was my thought. Never before had I heard a song of The Hip on Dutch radio, so it had to be.

When the band released its last record the story was that Downie had an incurable form of brain cancer and would die in the foreseeable future. That future was over one year later.

The Tragically Hip came into my life with its fourth album, 'Fully Completely', holding that special phrase for Dutchmen like myself: "I remember Buffalo, I remember Hengelo", from 'The Houndredth Meridian'. Searching back in time, immediately I found 'Road Apples' and 'Up To Here', the albums that to this day remain my two favourite TTH albums. Everything seemed to come together here, an intensity they never truly found again. From 'Day After Night', my fourth The Hip album, onwards the band started to play softer songs until I lost interest later on in the decade. Later in the 00s the albums became better again, but it just wasn't the same any more.

Live was a different matter. The band always went the little extra and Downie was a derwish on stage. Moving like he was twisting himself inside out, casting spells with his hands and arms, mesmerizing himself and his audience, while the band around him stoked up the fire ever higher. Always bass player Gord Sinclair caught my ear. His playing fills every hole there is to fill and take little leads here and there as well. I was lucky to have seen the band twice. Once in Amsterdam in the 90s and once in Utrecht in the 00s.

This band was such a sensation live that I never understood that it coudn't make that last jump to the larger venues. The music was there, the passion and the intensity of the shows. This band gave it their all and somehow that was not enough.

From day one the band played in the same line up and the members must have been real friends. Now that one pillar and probably an irreplaceable one has fallen, I do not see how they can continue or even want to. Time will tell.

For now I take out my 'Up To Here' copy and play that greatest of The Hip songs 'New Orleans Is sinking' in tribute.

You can listen to 'The Hundreth Meridian' in Hengelo here: