All The Things I Used To Love. Cecilia 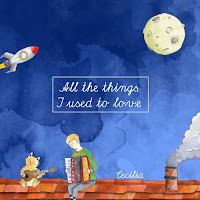 This summer I visited the studio of the Italian band Bongley Dead. I was presented a cd with the words "you do not need to write about it". Well, I listened to it and decided to do so anyway.

Cecilia Pellegrini in 2017 joined Bongley Dead, but is a singer-songwriter in her own right. So let's take a closer look at her self-released album. It was released two years ago this week, but it is time the world gets to know the mini-album a bit better.

The cover art of All The Things I Used To Love is like the cover of a children's novel. A dream of making music on the top of a roof, with a cat or to fly to the moon with a rocket that looks like a proper rocket, like Tin Tin's. There is a nice similarity with the music on the album. Cecilia presents her listeners with dreamy, perhaps even a bit naive songs, in the best possible meaning of the word. They are beautiful, ever so smooth and she has that little edge to her voice that all lady singers from Italy (that I know of) seem to have. And no, the music has nothing to do with the music of Bongley Dead.

Having heard Cecilia sing two of her songs live in the studio of Bongley Dead, solo with just a guitar, I was already impressed. Listening to what she is capable of on record, another dimension opens itself. Whether alone on her guitar, as in '1971' or with a band and a leading piano, 'Pareto Improvement', it is Cecilia who is in control of the song and the whole. Singing softly to the listener, in English or Italian, she takes us on a short ride. A ride through her musical universe.

Yes, I can totally imagine the two year old son of Federico (bass player in Bongley Dead) singing "toot toot" the whole day in the back of the car, at home and in bed before he falls asleep. The song has a jazzy undertone, a Paolo Conte style piano playing, but above all the toot toot chorus that is so easy to pick up for someone who does not have a lot of language yet. Federico give him the cd and he will probably take it with him his whole life, like I have taken 'Hello Mary Lou' ("Lou Lou") with me on mine since my 1st birthday. 'In Quale Posto I Meteoritti Vanno', "The Toot Toot Song" as it may be better known, is a beautiful song in its own right.

One of the highlights of this mini album is the best song Suzanne Vega never wrote. 'Pareto Improvement' is driven by a strong piano riff and a jazzy rhythm behind. The drummer is not afraid to hit the snare hard, to give this fragile song a oomph, a strong backbone. I like this song so much, that it is hard to imagine that, just like the best songs of Bongley Dead, it is heard by so little people.

By now I am in the mood that Cecilia wants me to be in. She takes it down, to more modest atmospheres without losing sight of the beauty of her songs. The upbeat 'A Thousand Miles Away' that takes us to the moon and see millions of constellations from there accompanied by the accordion player on the roof. The more solemn and serious 'Lovesong 27' takes the mood further to quieter music until the album ends with the small 'Lullaby (For All The Things I Did)', which makes the circle round for this album.

All The Things I Used To Love is only six songs long. Six songs in which Cecilia shows the world her huge talents. Six songs in which the mood is dreamy, laidback. Six songs that were given a lot of attention through intricate arrangements, in which with the modest means available the most is made of them. Anyone who loves singer-songwriters that try to move beyond elementary presentations would short sell him/herself to not listen to this exquisite mini album. An Italian talent presents itself in a near perfect way. Go on, try it out with the link provided below.

You can listen to All The Things I Used To Love here: