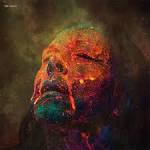 This spring Erwin Zijleman wrote a review of Remedies on this Blog (read here: http://wonomagazine.blogspot.nl/2017/05/remedies-soup.html). I was so intrigued by the cover, more than by the review, that I started to listen. I came close to being swept off my feet. Next I ordered the album online, as LP of course, as I fully wanted to enjoy the artwork. It never came. Instead I went to the label in Germany and received it within days. The artwork just goes on and on as it does with the three song EP I also ordered. Sleeves may have been put on walls, but this album cover can go to musea for modern art straight away. Lasse Hoile is an amazing artist. But what about the music? Let me get to that. First things first.

One of the most impressive pieces of natural art I have ever seen are in the middle of the Australian continent: Ayers Rock and the Olga's. These two rock formations can stand as an example of the music on Remedies. There are parts on the album that are totally monolithic, while other parts are windswept, open and more disguised. The music on Remedies is one big adventure taking listeners from one surprise to the other, from breathtaking parts to a repetitive and effective bassline that carries a whole section of side B.

Soup takes me deep into prog country. Way further than I have been for quite some time. Flying Colours is an example in the past years and Steven Wilson. That may be about it. This band from Norway holds nothing back and throws everything it's got into the record, the music, the songs, the band - and comes out a total winner. Another record contending for the top 10 in 2017.

To think that the album starts with a, heavily strummed, acoustic guitar and a way of singing that makes me think of Dutch band Blaudzun. In the background all sorts of things are going on already, tell-tale signs of things to come. A feedbacking guitar held in check. The singing is typical prog style, more telling a story than a true melody. At around 1"20 the music starts a soft build up, towards the second vocal part with a full band backing. From that moment onwards Soup takes its listeners on a magnificent ride past highs and lows, fast and slow, hard and soft, brutal and subtle. It is all there, one whole LP side long. The sleeve may say that there are two songs, but the main vocal theme returns later on, as you will notice. It seems to me that 'The Boy In The Snow', the title of the second song, is a part of 'Going Somewhere', title one.

Soup is a band from Trondheim in Norway and the vehicle for the musical ideas of Erlend Viken. After starting recording music in 2004, he released two solo albums. Through the years musician step in and out of Soup until for Remedies the band consists of Espen Berge (drums), Ørjan Jensen Langnes (guitar and keyboard) and Jan Tore Megård (bass), besides Viken. Don't be fooled by past stories, Remedies sounds very much like it has been recorded by a band. The density of the music is just huge. A wall of sound puts itself in front of the listener. It is not for nothing that the credits for the music are shared by Soup.

The sound at times is close to the limit of what my ears can handle. The cymbals are pounded tremendously hard, crashed, the dry sound of the snare drum that is hit equally hard. And then it all backs down again, like nature after the storm or after when a dog, close by, stopped barking. In these moments Soup creates a beautiful atmosphere where it is so pleasant to just wallow in. To undergo the music and follow the different instruments that move in and out of the whole. All the while the tension being built up, beat by beat on the drums. Instruments play more notes. More sounds are added to what the composition started out with and we return to the central theme of side one.

Side two totally changes everything. A church organ, recorded in the church of Namsos, the town Remedies was mainly recorded, is the sole instrument. 'Audion' is the title of the composition, that has nothing to do with rock, but is something that returns on a rock record every once in a while. As such it is the transition between the two album sides. On cd it will work even better as the music is one whole there.

The subtle way 'Sleepers' starts out with, hints that Soup knows its Pink Floyd. Like the synthsound does, coming straight out of the 'Wish You Were Here' album. The melody is somewhat more uplifting than Pink Floyd's at the time. 'Sleepers' is pure beauty in the way it is played, the small harmonies come together, the way the melody of the vocal and the synth beautify the monotonous core of the song, making me not want to miss a second.

When the bass takes over the basic duty from the acoustic guitar, the song changes in mood and directness. Slowly it is build out further, making it grander and more impressive. Layer after layer is added of little musical motives that fit together yet are different. Sonic storms come by and lie down when an electric guitar takes over the central duties as a solo instrument. Here I'm reminded of Mike Oldfield for just two minutes, before 'Sleepers' moves into its final sequence and the storms slowly return, to fade away again for a more electronic sound experiment worthy of a spot in Kairos.

The final song 'Nothing Like Home' morphs out of the soundscape slowly, little by little it exposes itself. Hesitatingly as if it is not supposed to be here at the end of Remedies, but is trying to get away with it anyway. Again, in these limited spots, Soup shows how good it is in harmonising. Changing moods in one song is an average manoeuvre for Soup, so it does so in 'Nothing Like Home'. Slowly the composition regains the confidence the rest of the album has and let's a guitar motive play the song home, with more and more instruments arranged in intricate harmonies and counter melodies around it. Bigger and bigger the song becomes, in nothing reminding me of its modest origins.

Remedies is one of the most beautifully covered albums ever. It is also one of my favourite progrock records ever. A perfect combination.

You can listen to and buy Remedies here: