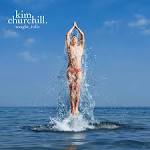 Yes, people, Jack Johnson is not the only surfer dude to write and play songs on an acoustic guitar. Kim Churchill from Australia is another one. Having seen him play in the Q-Bus in Leiden a few years back was an experience. Not just a singer-songwriter, no, far from that. Percussion on the floor and around his feet, loops that were built and sonic storms racing through connected stomp boxes, together created A performance. A rhythmic wonder Kim Churchill on stage is. So many things are happening at the same time, all made up on the spot or at least so it seems, that two ears at times simply were not enough to catch all the effects.

Come 2017, come Weight_Falls. This latest treasure trove of songs is his fifth album since releasing his debut, 'With Sword And Shield' in 2010. For me things Kim Churchill started with his 2014 album, 'Silence/Win'. An album that in my review called Sheeran, Howard, Hozier and Churchill I compared favourably to the at the time latest albums of the other names mentioned (read here: https://www.blogger.com/blogger.g?blogID=6022018216922190253#editor/target=post;postID=5836037832821262641;onPublishedMenu=allposts;onClosedMenu=allposts;postNum=1;src=postname).

Weight_Falls again is an album where Kim Churchill at heart is a singer-songwriter disguising the fact behind modern rhythms and a full band sound. Rhythms that can be handclapped or played on percussion and drums or from more modern digital sources. His guitarplaying always supports the rhythm, perhaps with a frivolous note or note pattern, rhythmic it is. When this effect is turned into a song like 'Heart Of You', I appreciate the effect certainly a lot less. It gets a little to Coldplay-y to my taste. His voice can do a Chris Martin easily too, yet Churchill will never overdo it and remains himself.

The thing that he excels in is also his pitfall. The performance is so extremely strong that the quality of the songs is noticed only when alone with the music at home. Not every song is as strong as the performance of the song. Having said that, as I wrote in the past, I rather listen to these songs than to Ed Sheeran's on any given day.

Forced to choose I would always choose the live show above the record. On stage Kim Churchill is a sensation. So if you have the chance go out and see him... Weight_Falls is a fair and certainly decent alternative and holds enough good songs to justify multiple listening sessions over time. Finally it is worth noting that Kim Churchill is not out to please in an easy way. This makes the album grow a little again, because when it gets down to it, it certainly does please.