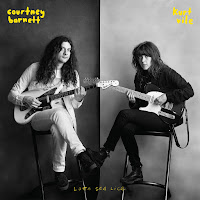 For those following this blog and indie music more in general the name Courtney Barnett does not need an introduction. Should there be anyone in the world who only follows this blog, I truly hope that that number is extremely low, Kurt Vile is an American indie artist, who is often associated with The War On Drugs, where he used to play in, years ago. The two artists have become close friends and decided to record an album together instead of each one album apart.

In the past three years Courtney Barnett became the darling of the indie press and fans with her ramshackle songs and a faint hint at a healthy from of craziness that found its way into her songs. Kurt Vile made less of an impression on me, so I haven't much to report on him here.

Together they create this laidback atmosphere in which songs find their own way forward. Both have a voice that can lift a song totally above its weight or drag it down, as both also have a whining quality when used in a less emotional way. Both versions can be found on Lotta Sea Lice, where of course the former wins, as I would never have started a review if it had been the latter.

The album opens with a formidable song called 'Over Everything'. The mid-tempo just goes on for over six minutes. The duo takes alternate singing duties, in which they barely hang on to the vocal melody it seems. The voice and melody waver, like they are in higher spirits. A Courtney Barnett speciality of course. The guitars interplay in a The Velvet Underground kind of way, without the starkly pounding, cymballess drums of Maureen Tucker. Slowly the sound is expanded, increased and more intense.

All the songs on Lotta Sea Lice are long. 4.00 Minutes is the minimum. Barnett and Vile take their time to work out their songs and really bring them to our attention. The approach is spot on as by far the songs work. The only exception is 'Let It Go', the second song on the album. There seems to be no end to it. The duo sets things right straightaway with 'Fear Is Like A Forest'. The song is so strong. With its Neil Young flavour it has that under the skin tension that makes it so good to listen to. The two voices work extremely well together.

The effect Barnett and Vile have on each other is clear by then and how they make each other better. The tendency to make songs go a bit wacky is suppressed in Barnett, while Vile's songs simply become better with Barnett on his side. From the streaming service I was allowed to use, I have no way of telling who is responsible for what, except that both do a take on an older song of the other. Kurt Vile does 'Out Of The Woodwork', with Barnett harmonising. Courtney Barnett does 'Peepin' Tom' all alone with a fingerpicked guitar.

It is a busy year for Courtney Barnett fans. Her wife Jen Cloher released a new, self-titled album with Barnett on guitar and singing duties and this one with Kurt Vile. The fans must have a hey-day as both albums are very fine to listen to.

In 'Continental Breakfast' the two sing about a continental friendship. Softly played, softly sung. I can't explain why this song works, where 'Let It Go' doesn't for me. The closest I come to an explanation is that the two both sing lighter and more lively, making the soft-touched song come alive. That they can sound deathlike as well, is shown in 'Unscript'. The influence of Lou Reed is all over the place. His main style, the talk singing with a deep voice, is something that Courtney Barnett has no trouble with at all. Her voice is the song, behind it things happen, but that is just filler. No matter how well the band plays together behind her and fills a long outro. Slowly the madness creeps in before it all is reigned back in before the final chords are played.

With 'Blue Cheese' a little country seeps in, like it did on 'Loaded' by The Velvet Underground. It works really well on this album. A banjo mingles with the electric guitars. Again the duo surprised me here. From the dark all this light comes in, making the song almost cheerful. In the specific circumstance of Lotta Sea Lice 'Blue Cheese' is a whopping party.

The album ends with 'Untogether'. The right title for a song made on two continents by e-mail? Again Barnett and Vile find the right voice for each other, something about the sum and its parts. The song is kept so small, the vocal melody and the harmonising do all the work ever so successfully. A conclusion that says nearly all there is to say about Lotta Sea Lice. A fine album it is.

BTW. It seems the Grace Slick from the second half of the 60s has reincarnated watching the promo photo.