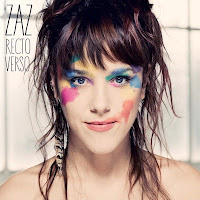 I'm going off the deep end here. Writing on an album of which I do not understand more than loose words here and there, never having managed to really grasp French, beyond ordering an egg or something. Still, with thanks to Erwin Zijleman's excellent blog 'De krenten uit de pop' (click here), I'm going to describe why you should not hesitate for one second to listen to Recto verso.

Recto verso is one of the most playful records I've heard in 2013. An album that I suggest to compare it to is 'A night at the opera', Queen's 1975 masterpiece. Also an album in which all barriers between pop, hardrock, jazz, vaudeville and what not were let down, leading to an unique blend of music that took nothing away from the strength of what was on offer. It is a comparable feat that Zaz pulls off on her second album. I missed out on her first one, 'Zaz', something I will make up on very soon. The comparison to 'A night at the opera' is not so much in musical styles, but in the blend that Zaz offers us. Jazzy like Vaya Con Dios in 'Comme ci, comme ça', driving on relentlessly in first single 'On ira' and beautifully poppy in 'Gamine' and these are just the first three songs, while at the same time touching on different moods in a very convincing way. The resigned desperation of 'Si je perds' or 'Si' is so beautiful in its impact and execution. By pointing out the utterly clear production of Recto verso on top of this all, it is clear that I'm writing on something close to a masterpiece here.

Zaz is Isabelle Geffroy, born in Tours in 1980. Busy with music from very early on in life she is active professionally for over ten years now. It is only in the last three that Geffroy is active under her own name and with a lot of success too I noticed reading up on her. Her background is mostly in jazz music it seems, but this is not what sticks out on Recto verso. There are jazzy elements on recto verso. The most playful contribution 'Oublie Loulou' is without doubt jazz. Zaz has listened to French chansons (and has the raspy voice for that kind of music too) and pop just as much. And is able to put down a very convincing ballad. It is this mix that makes Recto verso so interesting and diverse. 'Déterre' is such a great song that starts small and goes towards a climax driven forward by piano, organ and electric guitar next to Zaz's voice. 'Déterre' is followed just as easily by the jazzy 'Toujours'.

Recto verso takes the listener on a musical trip as well as on a mood trip. The album is bold as well as shy, self-assured and bashful, full of swagger and utterly vulnerable. Zaz gets away with it all, presenting herself on this broad range full of confidence. This album is something special, deserving to be heard. So, what are you waiting for?