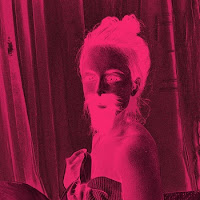 Hell, yeah! Girl Beard rocks and rocks hard. Like a bulldozer hitting the brick wall of an old building. Girl Beard basically gives away its debut album for free; that is, for any amount that you wish to donate. On WoNo Magazine's blog we do it differently, we pay the band back with our time and write a review for all the world to read.

The career of Case Mayfield is taking unexpected turns with each new release. Having started out with a singer-songwriter album, 'The many coloured beast', Mayfield surprised me with the great album '10' on which he showed the band side of his talent. This led me to write a very positive review (click here). Now he teams up with drummer Nienke Overmars and releases a garage rock album in a duo setting. In one word: fantastic. Unbelievable that Girl Beard gives the album away for free. On the other hand in these modern digital days somebody else easily does that for them without asking. So why not do it yourself and create more interest that way?

What's in a name? Overmars? Nienke is as fast as her, perhaps, family member Marc was. She's the driving force behind Mayfield's rockers. Just listen to the level of noise she produces in the non-song 'Swinger shlongrider'. Somewhere deep in the background there may be a song going on, the contours of which come out towards the end of the song, the rest is this endless pounding of Nienke underneath all this other noise going on, while Mayfield is shouting pieces of text over and through it in several layers. Perhaps no one knows what is really going in the diverse layers of the song that ends the album. (Until you listen more carefully....)

Before that the listeners has heard several straightforward rockers. Arranged "simpler" than The White Stripes, not unlike Blood Red Shoes in the days of its debut album, much more down to earth than 'El Camino' of The Black Keys, but the good news is that the quality of the songs on Girl Beard can easily compete with those on the albums of these bands. There is not much of a bigger complement possible. Mayfield may be picking fights with a lot of people in recording and broadcast circles, but delivers higher quality per album. 'Alright Jane' is such a fantastic rock song. The guitar playing starts elementary, after which Mayfield finds lead notes while keeping up the rhythm, presenting small variations and small melodies that make 'Alright Jane', just like all other songs on Girl Beard, more than interesting and great fun.

In a two piece band there's no hiding. The only thing to keep a listener interested is the quality of the song. Mayfield and Overmars do just that by taking him on a tour around the curves of each song, with the right dynamics, stops and starts, explosions of sound and above all well written songs. And then Girl Beard holds 'Erased'. A sort of holy grail kind of song. I just love the muted guitar part that drives the verses.

Case Mayfield's not every day voice keeps up very well in the garage rock setting of Girl Beard. This surprises me somewhat, but I'm glad it does. Girl Beard is a new stage in the comet that Case Mayfield is. A bright new star on the firmament, tail blazing with the help of Nienke Overmars. What will be next? There's no predicting what Mayfield may come up with next. In the pace he keeps up, it won't be long before we find out.

You can listen to and download Girl Beard here.