Country Joe McDonald at Woodstock: History being made 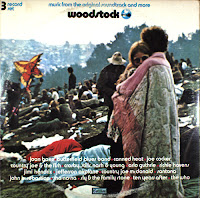 Yesterday I viewed or listened to a lot of circa 1960 hits that presented itself on You Tube after I had clicked on the Dutch 1965 superhit 'Sophietje' by Johnny Lion. I had sat on a terrace overlooking the river IJ in Amsterdam and came home with 'Sophietje' in my head as the song goes "On an Amsterdam terrace". The song is with me for as long as I know, maybe for longer than I can remember, that it has always been sort of there since 1965. Clicking and clicking, Paul Anka, Neil Sedaka, Brian Hyland, The Four Seasons, Dion & the Belmonts, Del Shannon (My girlfriend: "I know all of these songs"!), etc. Until Woodstock came up and I listened to 'White rabbit' by Jefferson Airplane and then clicked on Country Joe McDonald. Despite the fact that I've seen the footage before on film somewhere in the late 70s and later several times on DVD, the song never before had so much impact. The performance stood out for me. But let me take you back first.

My teenage friend Frits' dad and mine were both merchant marine officers. Frits' dad brought home Taiwanese pressings of LPs (as mine would not much later). One of these albums was Woodstock. So in 1972 and onwards, we were listening to the official soundtrack album for whole days in a row. From Ritchie Havens all the way to Jimi Hendrix. With the exception of Paul Butterfield's Bluesband and to a lesser extent Santana and Joan Baez, I dug it. I dug it enough for a lifetime worth. The fantastic versions of Ten Years After's 'I'm going home' or Joe Cocker's 'With a little help from my friends'. Arlo Guthrie's beautiful 'Coming into Los Angeles'. the nutty madness of Sha Na Na, 'Volunteers' that spat of the vinyl: "This is morning maniac music, believe me ... It's a new dawn!". And the only available version, as far as I'm aware, of Neil Young's great song 'Sea of madness'. 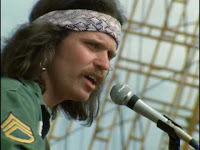 In between this all is this anti-Vietnam protest done by one man with one guitar: 'I-feel-like-I'm-fixin'-to-die-rag' or 'The fish cheer'. One guy taking on the whole of the US establishment, government and military complex. First on this spot, then on record, on film and now on the internet forever and ever. If you look at the footage, you'll notice a few things. First the audacity to start "the fish cheer", "Give me an F, a U, a C, a K: "What's that spell?" and the audience answering, summing up. So much for the "fish" cheer. We see a man with long hair, bound in by a bandanna, a moustache, earring in his right ear and wearing army sergeant fatigues with a blue coloured scarf on his left sleeve, armed with an acoustic guitar. "A hippie". The footage shows the audience and Country Joe alternating. What amazed me is the impact of the song on those present. From amazement on the faces of people in the audience. 'Am I hearing what I'm hearing'? The singing along. Many people knew the song beforehand. Remember that almost all guys present at Woodstock, bands as well as audience, were at the draft age and could be sent to Vietnam any time soon. And then the most beautiful thing happens of all.

The camera angle changes. First it shows Country Joe's back and then goes up and zooms out ever so slowly to the audience, showing ever more people getting up to stand and sing, where everyone was sitting and listening before. An audience so large that it goes up the hill in Max Yasgur's cow field and perhaps disappears behind it. And all get up to sing and cheer with one man and one guitar. Yes, music can have a profound impact on people, but does it ever have it at this magnitude these days? After finishing the song, Country Joe McDonald stands up from his stool, waves with his guitar to the audience and walks backstage where someone approaches him, embraces and kisses him on the cheek. This guy realised that history had been made that evening.

For the first time it dawned on me what impact this performance had on the people present. Probably because it was isolated from the rest of the Woodstock movie. This way it touched me directly.

Listening to 'I-feel-like-I'm-fixin'-to-die-rag' yesterday made me realise that I only know two Country Joe (and the Fish) songs, both on Woodstock and never ever have heard another one. ('Rock and soul music' obviously being the other one.) One of it's albums was re-released recently. I intend to review it on this blog soon. What will it sound like?

You can watch Country Joe McDonald at Woodstock here.
Gepost door Wo. op 09:58