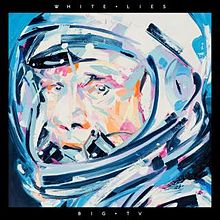 There are these magical moments while listening to music that are unexplainable. It happened to me recently listening to a piece of music that I had no clue about what I was listening to. After listening to the brilliant show of Arctic Monkeys at Glastonbury this year, when something else came on. I was playing hte music somewhat louder than I usually do. These dark foreboding synths, a deepish voice. A combination of early eighties music and Scott Walker or The Walker Brothers. The music slowly picking up and going towards gigantic proportions, totally enveloping me. I was captivated. There's just no other word for it. What is this? I just needed to know. 'Big TV' by White Lies was the answer. And I was surprised.

White Lies was a band that was of my radar. First album 'To lose my life' was sort of okish. Not bad, but far from good and certainly not lasting. The follow up album 'Rituals' disappeared from my radar almost immediately. More of the same and more pumped up. So Big TV was not high on my list of new albums to check out. Fate helps every once in a while. 'Big TV' made me listen to the rest of the album and yes, I'm liking what I'm hearing.

White Lies is a band that was born thirty years too late. They would have loved to have broken big in 1983-1986. The difference being that we probably would not have heard from them again since 1988. Most bands did not make it beyond this era. White Lies seems to be going around for a while. The sound of Big TV is bound to bring them to arenas and stadiums. A career like Muse has, should be within its grasp. On Big TV White Lies has put a lot of attention to songs, melodies and boombastic production. The synthesizers of Gary Numan's Tubeway Army are all around. The passion of Simple Minds is there in a sort of undercooled way. Tears for Fears' Roland Orzobal's voice can be heard in Harry McVeighs bariton. The 80s are all over in the synths on Big TV. And here I am a certified 80s music hater. Sort of caugh out.

White Lies seems to have gathered the few elements that I do like into most songs on Big TV. The way the guitar kicks in on 'First time caller' works wonders with the typical 80s electronic violins part. The double tracked vocal on 'Mother tongue' is all it needs to be. McVeigh is harmonising with himself in a great way over a muted electric guitar and tight rhythm. Most songs are a strange mix of dark depression and upbeat melodies. The music and the voice are not always in sync, but I'm starting to think that this is one of the secrets of Big TV. When both do find each other, like in the chorus of 'Getting even' things go from good to sheer magic. "I can forgive. We can forget". Listen to that and you'll know.

White Lies is not alone in 2013. Editors is a band that is close to it. (Perhaps I'll have to set myself to listen to Editors' new album as well.) Muse is even more bombastic and classically influenced, but comes close. In other words, from 'The sun ain't gonna shine anymore' right up to 'A ton of love', it is all here on Big TV. From ballads to up-tempo rockers and serious songs. All together Big TV is this amalgam of new wave, rock and synthpop with the good elements incorporated in the right places.

To balance this review, I'll admit to the fact that with two ballads on Big TV, my attention span wanders off quite fast. All moody, no inventiveness. Where 'First time caller', a third ballad, has all these features, a song like 'Heaven wait' has not. A bit too boring to be honest to make the ballad work. Harry McVeigh's voice works against him or to be more exact, me, here.

Should you ask me where the difference between the first two albums and Big TV lies, I would say at this stage that Big TV holds songs that are better crafted. The vocal melodies are more fluent and invite (me) to singing along. Something I was not bothered with before. Most songs have all these fun details going on, giving my ears something extra to listen to each time again. And yes, the 1978 sound of Tubeway Army is all over Big TV and I loved 'Are friends electric?' Then and now. The guitars coming over the melodies at times. All these sort of arrangement parts that stick out. It makes me want to listen and listen again. And that's a first and necessary step to becoming a favourite album.

You can listen to 'There goes our love again' here.