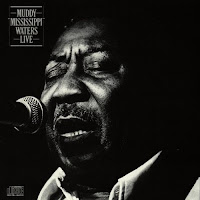 You can listen to 'She's nineteen years old' here.

On the occasion of Muddy Waters' 100th day of birth I re-posted a blog on 'Checkerboard lounge', the DVD of Muddy playing together with three (or four) Stones in Buddy Guy's Chicago club. I promised then to listen to some of Muddy's albums and write a review. Let me start with the first one I ever heard.

Around 1980 I had a friend who basically changed his life's rhythm pattern in the summer holiday. From day to night, listening to the radio all night, picking up new music and old. One of his tips was this live album that remained one of my favourite live albums ever.

Muddy Waters', born McKinley Morganfield in 1913, recording career started on a farm somewhere in the Mississippi delta where Alan Lomax recorded him on his porch, decennia later released as 'The complete plantation recordings'. Like many other coloured Americans he took his chances and moved north to Chicago, where he emerged with an electric guitar being one of the pioneers of electric blues. His career was revived, especially in Europe, through the blues bang in the UK in the early to mid 60s. In the 70s Johnny Winter revived Waters' career again by producing three albums in which most of Muddy Waters' best songs were rerecorded in a modern studio with modern techniques. Blasphemy to some, the best thing that could have happened as the songs now stand out as an epitome of electric blues. This live album was the third album in a row of four with Johnny Winter in control. Since several years the original album is also available as a legacy edition with more than twice as many songs on the second disc.

Looking at the original album there are just seven songs, recorded at three different locations in 1977 and 1978, released in 1979. Not even the musicians are all the same. Despite that, this was how blues was supposed to sound to me when I was twenty and some years old. It took me years before I could appreciate the original thing. Now in 2013 that has changed, just like blues does not offer many surprises any more. It has become good time party music to listen to live every once in a while. This album, together with 'Hard again', Muddy Waters' first release with Johnny Winter, are the exceptions. Before Live I had hardly ever heard anyone play a solo like Luther "Guitar Jr." Johnson. This solo that sort of goes on and on, where it is "supposed to stop" at the turn around at the 12th bar, but doesn't.

There are other instances of fine musicianship. The mouthharps of James Cotton and Jerry Portnoy. The call response between singing and harp were all new then to me and still sound fresh and fun to me now. The piano of "Pinetop" Perkins that rolls in the background and at times comes forward.

Muddy Waters by that time was an older man. Looking like a benevolent grandfather, which he was many times over. (At the same time, he had a much, much younger girlfriend, 'She's 19 years old', 'Deep down in Florida' seem to have to be taken literally here.) At shows he used to sit on a stool and mostly reserved his energies for his singing. The band did everything for him, making sure things gelled and rocked, whether slow or fast. At times Muddy lets things rip in a fiery solo, like in 'Howlin' wolf' and 'She's nineteen years old'. As slide guitarist he may not be flawless, but certainly full of passion and great attack. There's no mistaken who is satisfying who through the solo in 'She's 19 years old'.

Muddy "Misissippi" Waters live is an album that has the right balance between hard rocking blues, subtlety and virtuosity. The band is a great dynamic machine, serving the right mood in the right places of a song. Solos are dispensed by Waters to all band members who get the chance to shine in his sun. There's no misunderstanding about who's the boss here. Just listen to the cheers of the audience at specific parts of the lyrics. At most of the tracks where Winter's playing he gets a little extra attention, being a star in his own right, somewhat consumed by alcohol and heroine, but a star of late 60s and 70s blues in the U.S.

The legacy version gives more, which I will not discuss here. The original LP is enough. That had the strong impact on me and defined my taste in blues. Let me end with referring you to a Muddy Waters biography that is well worth the read: 'Can't be satisfied: The life and times of Muddy Waters' by Robert Gordon.