Ride on the train (2). Hollis Brown 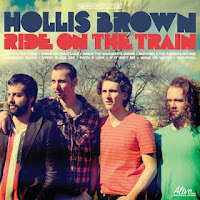 It took me a while to warm to Ride on the train. Perhaps I just wasn't in the mood when I listen to the album the first two times. Not even Erwin Zijleman's review (click here) or the enthusiasm of Q-Bus coordinator and infrequent WoNo Magazine contributor Hans could persuade me differently. Now that Hollis Brown is booked for said venue, I decided to give the record another spin. One thing's for sure, I'll be there on 12 September. Perhaps I can persuade you to join me and buy a ticket?

Hollis Brown is a new, young band from New York City. However, looking at the sleeve of the album it has all the tell-tale signs of a 1970s LP or even 10 years older. All the titles are on the sleeve, green and orange clothes. Musically the past is present as well. Creedence Clearwater Revival or more accurately the singing of John Fogerty is here. Neil Young can be heard in the chugging guitar of 'Gypsy black cat'. The ooh-ooh harmonies of The Eagles? It's here in 'Down on your luck'. In other words there's that rare mix of rock, country, blues and soul on offer here. Then the one, then the other musical flavour comes up a bit more. 'Faith & love' has this soulful glow that makes the song shine like a polished shoe. It's so relaxed with its firm drum and voice around which the other instruments dart adventurously.

'If it ain't me' comes as a total surprise. Hollis Brown tries to topple a song like 'Thirteen' by Big Star in beauty. Time will tell if it succeeds. The acoustic guitars are intricate and soft. If 'if it ain't me' shows anything it is that Hollis Brown isn't caught out at being good at one trick. The band has the confidence to put this song in between the somewhat harder rocking songs, making Ride on the train all the more interesting. When a band can come up with a beautiful song like this, it can do anything.

Ride on the train reminds me of the debut album of Dirty Sweet, '... Of monarchs and beggars'. To really succeed one thing is missing. A winning rock 'n' roller like 'Delilah'. This is the only thing I find lacking on the album, one or two songs with just a little more spunk that really make it stand out. It wouldn't surprise me if those songs will come in the future. The potential is there in Hollis Brown. Ride on the train as a whole beats '...Of monarchs..' easily by the way.

Summing it up, Hollis Brown has delivered a fine debut album, that is rich in songs and melody and shows a variety in songwriting that holds a promise for the future. Yes, musically the band looks behind them for inspiration, the future is there for it to conquer. On Hollis Brown's first steps in The Netherlands I'll be watching the band from up close. Come an join me, I'm sure it's worth it.

You can listen to 'Nightfall' here.