Don't forget who you are. Miles Kane 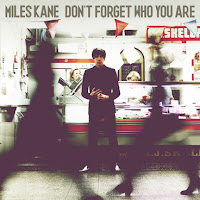 You can listen to 'Don't forget who you are' here.

As a pillar of rest in a hurrying world Miles Kane presents himself on the cover of his new work of art. An image that is not necessarily in sync with the music on Don't forget who you are. "I need excitement and I need a" friend? No, a "cure", sings Kane. Excitement is a better description of the music on the album. Miles Kane again shows progression on his new album, the way an artist should at the beginning of his career.

Miles Kane started his career in The Little Flames, a band that split up before the first album was released and debuted with his band The Rascals in 2008 with 'Rascalise'. It his here that the link with Artic Monkeys starts when The Rascals support the band on a UK tour. This lead to Alex Turner and Miles Kane teaming up as the fairly successful The Last Shadow Puppets in 2008, with number 1 slots for album and single in the U.K.. After that Kane was on his own, as he disbanded The Rascals in 2009. In 2011 his first solo album was released, 'Colour of the trap'.

Although I liked 'Colour of the trap', it did not stand out enough on what was on offer. Don't forget who you are does. For the first time, in my humble opinion, Miles Kane shows his strength on his own, not needing any reference to anyone else. He's his own man. Having mastered most of pop and rock since the mid 60s, Kane comes up with several hard rocking, sprightly songs. In some of the songs he's the harder rocking pall of Robbie Williams ('Give up'), allows a song to relax, almost touching on a ballad ('Fire in your heart') or shows more poppy side of himself without letting go of loud guitars ('Darkness in our hearts'). Most songs are up tempo though and full of urgency. As if Kane has points to make, hammered home full of confidence. This word seems to sum up Don't forget who you are best: confidence. Kane knows what he's doing and where he wants to go. The album is over all to soon.

As I wrote the influences seems to come from all over the place. The Arctic Monkeys reference will be on Miles Kane for ever. Opener 'Taking over' has this typical AM turn in the song into the chorus, but just as easily lets in a little T. Rex boogie or Motown backing vocals in. 'Taking over' shoots of in different directions, but remains a great song in its own right. The result shows that the influences were used in the right way and lead to a Miles Kane song. After listening to the second song, title song 'Don't forget who you are', I knew that this album could not go wrong. Again the twist and turns of the song lead up to fantastic chorus, including a small "la-la-la". And it doesn't. 'Don't forget who you are' is a wonder of pop, (glam)rock, britpop and mostly in the heavier segment of all three.

Looking at the co-writing duties, Miles Kane got help from famous friends. Andy Partridge, Paul Weller, Ian Broudie and Guy Chambers. With a little help from his friends he gets a long way. In short Miles Kane has produced on the best pop records of 2013 so far. On Don't forget who you are he shows his full potential in great songs, melodies and comes up with several nice sounding riffs as well. Time to take a listen, dear reader, if you haven't yet.