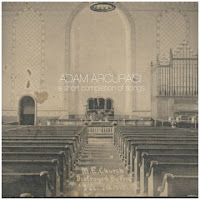 You can listen to and download A short selection of songs here for free.

What an intriguing cover of this EP. Notice the stains left in the middle. Looking better there is white lettering in the middle below. Reading carefully I learned that I'm looking at a picture that is at least nearly 98 years old, perhaps older, as the church in the picture has been destroyed in 1915. That is half way the first World War. Is the music on offer as intriguing as the cover photograph?

No and yes. As with many things, that depends on what one wants to hear. Adam Arcuragi is an American songer-songwriter from Georgia. Since 2006 he has released four cds of which one was an EP. A short selection of songs is, as the title suggests, a compilation of songs from previous efforts. As I have missed them all, let me draw some attention first to this gift from Arcuragi.

A Short selection of songs is a five song EP that asks something of the listener as it is not exactly upbeat, more the opposite. The tempo is mid range to slow. Arcuragi's voice is certainly pleasant to listen to, but has a sort of constant complaint undertone concealed in it. As a listener one has to be able to deal with this. As far as I'm concerned I can listen to his voice again and again. Around the voice everything else starts with Adam Arcuragi's acoustic, steel-stringed guitar. For aficionados of acoustic guitar playing there is more than enough to enjoy also. 'Sin is just an old archery term' (great title btw) has this fine, subtle melodies of a few notes that are stressed. From there all the fun starts. Harmonies here, a trumpet there, a brushed snare doing the rhythm quietly in the background and finally a few lap steel notes. 5"30 and not one moment that shouldn't be there.

Wikipedia credits Arcuragi with being the founder of the musical genre Death gospel. As I'm thinking half of the time 'this song could be on a Bonny 'Prince' Billy album', this credit may be a bit too much. But listening to a song like 'She comes to me', the moniker does not really do right to this bitter sweet song either. The other reason why I do not agree, is that his music has too many fun elements in there that embellish his songs and make them not just bearable, but most interesting to listen to as well. The previously unreleased 'Cobra tie' is just plain beautiful. As mesmerising as the eyes on the tie, no doubt.

With mentioning the alias of Will Oldham just now, I have given away the biggest influence that I can discern on A short selection of songs. In the way Adam Arcuragi sings, as if he runs out of air every once in a while and in the atmosphere of the songs. It just fits, but without being a copycat. The songs all stand out on their own. Behind Oldham there's someone else lurking in the background also. In a song like '...Riverrun' I hear something of Van Morrison. In the way of singing and in the arrangement. '...Riverrun' isn't as smooth as Morrison's music in the last thirty something years, but the flow of it is unmistakable.

Adam Arcuragi is a singer-songwriter who lends enough from (alt.)country, folk, blue grass and a smattering of well-hidden pop, to come up with songs that are more than just interesting. They invite to sing-along to, to listen to intensely, with full concentration and to have playing in the background. All in one. Yes, I'm interested and plan to check out more from this singer-songwriter. Noisetrade.com did its work again. It made me discover Adam Arcuragi.