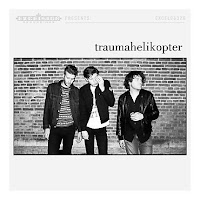 You can listen to 'Down in the city' here.

This album is out for a while now. I just never got around to taking a listen. The short performance in 'De wereld draait door' was great fun, still I didn't get around to it. Just recently I finally did and I succumbed. What great fun. Two guitarist and one drummer, the Jon Spencer Blues Explosion line up. traumahelikopter rocks out with a punky attitude, not unlike classic Iggy Pop. Up tempo and in your face. Just like the better punk bands of 1977 the band manages to couple aggression with melody and so creates several winners on its debut album.

The music on traumahelikopter is old as the road to Rome. Excepting the actual songs, nothing new seems to happen on this album. The style, the riffs, the sound, the way of singing all sounds extremely familiar. 'Bad day' goes all the way back to 'You really got me'. The compliment that can be made to traumahelikopter that there is no copycatting going on on traumahelikopter. The band just blasts it out in one big surge of energy. Two songs make it past 3 minutes, three don't even make it two. Eleven songs and it's all over. traumahelikopter knows exactly when to stop. It makes its point and leaves us flabbergasted.

The songs are so convincing in its punky rock style that there is no need to point out high lights or down sides. There's no use to mention subtleties or fantastic breaks or harmonies. Songs make its point with or without a pointy solo. This suffices. traumahelikopter is an album that I simply undergo, enjoy and play again. Everyone loving the earliest The Kinks, anything garage rock from the US in the mid sixties, 'Helter skelter', the whole punk explosion of 1977 and some garage rock eruptions since 1978 can't go wrong with traumahelikopter, says,

You can order traumahelikopter here