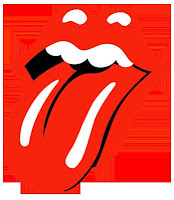 No, I wasn't at Glastonbury, I even missed the TV broadcast on the BBC, but did watch it on the internet this afternoon. Whatever some people may have written on the Stones tour in the US, this show rocked and the band plays totally convincing. There's nothing more to conclude having watch the show. Despite the fact that I was at one show during every tour since 1982 and vowed not to go to another again, I noticed that I was sitting with a big grin on my face during the whole broadcast. No matter what happens, the music of The Rolling Stones is a part of my DNA. Music I grew up with consciously ever since 'Honky tonk women' was released in 1969 and rode the Top 40 to the number three spot.

Yes, the Stones tour 50 and counting is a greatest hits tour with hardly any songs from past 1981. The two new songs of 'Grrrr' being the exception to the rule. With no one most likely wanting to hear them, really. Some songs of the 90's are being neglected which shouldn't be. 'Love is strong', ' Anybody seen my baby' and especially the greatest Rolling Stones song of the past 32 years, 'Saint of me'. Greatest hits that the world wants to hear and pays money for to hear. The band supplies and is again riding the waves of popularity and attention. Eight years after its last album release.

There's nothing more to say. The rest you can see for yourself. Old guys rocking out, that they are human and make small mistakes and that they swing like hell. Listen here and 50% of the show is on view here.