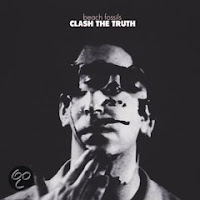 You can listen to 'Careless' here.

Last year I wrote a review of 'Oshin', Zachery Cole Smith's album, who played in the live band of Beach Fossils before starting his own project DIIV (click here). Now that Dustin Payseur, who is the driving force behind Beach Fossils, has released a new record, it is time to pay a closer listen.

The short version of this review is that Clash the truth is this deliciously, jangly indie pop record. Pleasant guitar melodies are all over this record. 'Taking off' perhaps is the best example of that. Guitar lines come in from over place in the Robert Smith, Johnny Marr and a lot of other 80s new wave icons kind of way. Light in sound, optimistic and fun. Payseur's voice floats over this in a distant way as if it is non of his concern what happens to the lyrics in combination with the music. He keeps his distance with his way of singing. Having said that, it is not as if Beach Fossils took a bus fare to the past. No, the band is in sync with many artists in this time and place. Seapony, Best Coast, DIIV, Veronica Falls are but a few names of bands that come to mind that I listened to in the past month. All combine a hang for past music with '10s urgencies. Much lighter than 80s doom and gloom that hung over music and society then. No more nuclear holocaust in 2013.

There is another link to modern day music. Clash the truth has this light psychedelic undertone. The lead guitar line in the intro of 'Taking off' that seems to miss the curve, to get back into the song only just in time is a good example of this. A great little trick in which the recording with that guitar line seems to be sped up a small turn at a time, where the rest of the song does what it is supposed to. Creating this tension within an otherwise pleasant song. The way Dustin Payseur sings is the other part of this story. Dreamy, sometimes distant, like I wrote, sometimes he does not seem necessarily part of what is going on with the music.

Not that all is happy. Payseur sings 'Say I want and I will burn you down' in 'Burn you down'. Now where does this come from?, is but a question that springs to mind, listening to this fast and fairly up beat rocker. Not so happy and dreamy, is it? No matter how dreamy Payseur sings.

For the rest Clash the truth is a fun indie rock album. The melodies are interesting, there are loads of guitar melodies to follow. No, Clash the truth is not the best album you'll ever hear, but there is enough to explore while playing this album regularly, for everyone who started liking The Velvet Underground and liked all things indie rock since or the other way around, like I did. Beach Fossils has come up with a very pleasant album, very much worth checking out.

You can order Clash the truth here