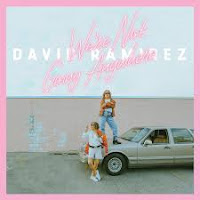 "Where were you ...  when we lost the twins. Where were you when the fear settled in". That is one way of entering into an album and how David Ramirez introduces himself to me. Spooky, scary and almost other worldly. It is just not something I fell comfortable being confronted with. An expression of feelings so intimate, so privately confrontational that I can only hope (for) Ramirez (he) has made this up or used an example he encountered somewhere along the road of life.

On 2 February David Ramirez plays the Q-Bus in Leiden and this could well be a show that is going to be very interesting attending. Based on his latest album, We're Not Going Anywhere, to me it is clear that I will be going somewhere soon. The music is a mix of dark Americana, pop synths and indie rock, including a strong influence by Ryan Adams.

Ramirez started playing music in the 90s covering indie rock songs until under the influence of Ryan Adams he started a new band playing folk and Americana songs. Since the second half of the 00s he's playing solo and recording records since. We're Not Going Anywhere is my first exposure to his music.

The title of the album is not one of excitement, progress nor change. We're Not Going Anywhere suggests a dark touch and that is exactly what David Ramirez delivers. Some of the songs do not allow any light in. With the title song perhaps as the darkest of all. Don't ever listen to this song when standing on a platform with the train rolling in .... Ramirez at first whisper-singing the song making it near impossible to stress any part of the melody. With just a piano behind him, he fills the whole space of the mix with his voice as soon as the volume and emphasis go up.

Others hold a little pop feel within them. Again others play with the more heartfelt songs of Bruce Springsteen, without ever getting that pompous sound that I dislike so much in that artist. Ramirez is able to give that kind of song a lighter touch, allowing it to breath and show its strong points without having to overdo anything.

David Ramirez manages to keep my attention with the record. By infusing other elements into his songs, like a strong indie rock guitar solo in 'Communion' combined with some fine pedal steel guitar playing, the song does not so much let the light in, yet totally comes alive. It shows how different sides of music can influence each other in a successful way.

Musically David Ramirez fits in well with many artists I have seen in Q-Bus over the years. Like Grayson Capps, Tim Easton or Nels Andrews. Ramirez shows more restraint on record. The less is more principle definitely was applied when arranging and recording We're Not Going Anywhere. Devoid of instruments is the wrong definition, how to apply them as little intrusive as possible is certainly applicable.

We're Not Going Anywhere is not an album for everyone (if such an album exists of course). Many will be turned off by the dark atmosphere. Those who get past the first lines and song, may be in for a trip. Perhaps an unsettling one, but not devoid of beauty. I'll be honest and share that I have not made up my mind entirely what my relation to this album will be. What I do know, is that if Ramirez can bring this intensity to the stage, his shows in this country may prove to be very memorable. Just try the album is my advice and see how far in you get.

Information on the Q-Bus show you find here:

You can listen to 'Time' here: