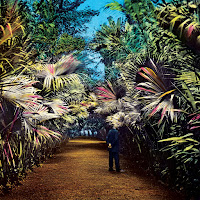 What a nice surprise, this new record by Tim Knol. The level of pop is so exquisite it is near impossible to resist.

From the get go of his career Tim Knol was on the radio and tv without that leading to a massive breakthrough in the form of hits. He played every festival for two years in a row. Which seems the 10s normal for artist in the more serious segment of music. I have seen him play twice, but somehow his music never totally convinced me. Too much of trying to be someone else? Perhaps. His third album totally passed me by, as it seems to have been the case for more people. The The Miseries album came totally out of the blue for me. An album so different from all that went before, including a near earsplitting show in Leiden. After that silence. Tim was noted as having become a photographer and traveller.

Come 2018 and a new album in which all seems to come together. His singer-songwriter characteristics blend with the pop part of the The Miseries pop-punk. Tim Knol has no fear to use the most, blatantly obvious choices of notes and chords, including a na na na part to get to the most beautiful result. In that he comes close to the music of Douwe Bob and his former band companion Duyf, now playing with Douwe Bob. Comes close, I write, as Tim Knol is not copying here. This is his own distinct voice and signature, leading to his best album to date. Reading the bio accompanying Cut The Wire shows there is no animosity between the two. Douwe Bob joined the recording process for two days, as did Tangerine (his once support act). Anne Soldaat is, as ever, present as side kick and producer.

In the music elements of country are infused into the songs via guitar licks and even a pedal steel guitar. Pop shines through the vocals, the acoustic guitar and vintage (sounding) keyboards. Some songs hold The Beatles or The Kinks like vocal melodies, others delve into singer-songswriters of old and Americana from the U.S. The influences on this album range from far and wide.

I'm going to focus on 'Going Places'. A song that has it all as far as I'm concerned. A great pop feel melody, some light behind the shade and a blistering guitar solo, distorted, fierce and fiery. Upsetting the whole apple cart of Cut The Wire. A 30 second plus intro. This is Tim Knol having come of age and showing us who he is and where he stands in life. The pop feel 'Going Places' is of the same quality Maggie Brown plays on its last album 'Another Place'. Knol lets us hear what he wants us to hear, released of all pre-conditions and expectations of others and, yes, that may well be the outcome of the freedoms The Miseries allowed him. Chapeau, Mr. Knol for this song.

In all Cut The Wire is an album that presents a few sounds and textures. Different sides from Tim Knol show through, including a darker, perhaps more doubting one. Like in a song called 'Kickin'', sung with a deeper voice. This is offset by the more poppy and 60s sound of 'Listen Love'. In short there definitely is something for more people in Cut The Wire than in his previous solo recordings that were more one-sided. Whether that is a good thing for Knol's career remains to be seen. In my opinion it is. Change allows for longevity and growth in a career. Cut The Wire is abundant proof of that.