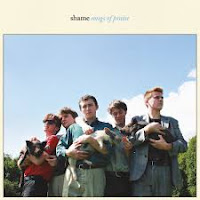 Every pop and (alternative) rock fan in The Netherlands must be aware since mid January what the new flavour on the block is: Shame from London. What strikes me most at first listen is that, barring the voice of Charlie Steen, not one of the commentators goes back to 1980 and U2s first album, 'Boy'. I won't say Edge's sort of guitar playing is all over Songs Of Praise, but influential? Certainly! From there things get much darker though and not only because of the unschooled and rough singing of Steen. His compadres match him every step of the way in the level of noise they create together to support his bravado where technique may run short.

Looking at the album like the man I am, I could take the same approach as I took with 'Going Platinum!' by Robert Finley. Do we like the album for what it is or for the things we are starting to miss in our lives: good new albums by our original heroes (dead of alive)? Shame does everything many a band from the late 70s and early 80s just cannot do any more. The Stranglers, The Clash, U2, The Alarm and a little later Big Country, The Armoury Show and my recent discovery The Jazz Butcher, etc., etc., etc. Lots and lots of excitement, loads of energy and quite some rough edges left unfiled, so dangerous to the touch. So do I?

The answer is no. Songs Of Praise fully deserves my attention and not just because I like this music better that the soul/blues of Finley. For that the music of Shame is brought with too much spark to ignore. Once let in this band is all over me and demanding my full attention. Deserving it as well. So nice to find that a hype for once seems very much deserved.

Trivia aside. Songs Of Praise starts in my face. Directly, without holding back. Shame is not trying to play nice first in 'Dust On Trail'. "Music for the weak" is the motto on Bandcamp. Well I doubt it, perhaps in spirit? Gravelly guitars go all the way and Steen singing like he's chanting in a Satan's mass. Before he puts on his punk voice that is, like many singers sang around 1977, Joe Strummer style. The rhythm sections is tight. There is just nothing nice about 'Dust On Trail'. This album is from the street, even if the average Shame lad does not appear to be from there.

The die is cast. Songs Of Praise is an album with the strength of 'Definitely Maybe', the spirit of 'Franz Ferdinand' and the power of 'Whatever people say I am, that's what I'm not'. Arguably the best debut albums in the past 25 years. Shame throughout the album is able to work with moods, the light and the shade creating a strong and varied album. An album where anger and rage compete with the pleasure of playing these songs. There are only 10 of them and I can only hope for Shame that they can add a set to them soon instead of travelling the world round three times over for three years on the basis of just 10 songs. It will probably kill its fun in writing and creative processes. Write, boys, write, like it is 1963. Develop, grow, as all the potential is there to come up with even better songs. Boy, am I enjoying Songs Of Praise.

You can listen to and buy Songs of Praise here: