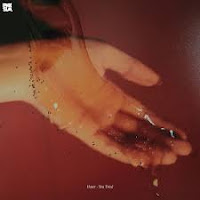 You Tried was released early in 2017, but passed me by. It was the EP 'Red Blinders' that received a more international release and drew my attention to the Malmö, Sweden based band Hater. (Read my review of 'Red Blinders' here: http://wonomagazine.blogspot.nl/2017/11/red-blinders-hater.html) That got me into this album and as the band comes to NL this month, why not listen a bit more seriously?

The band formed only in 2016 and released a first EP, 'Radius', soon after, followed within the year by this album. All band members have gained experience by playing in other bands and seem to have a distinct view on where they wanted to Hater to go, so miles could be made fast.

'Red Blinders' is clearly already another step forward for the band. It is much darker and more 80s influenced than the music on You Tried. I'll admit straight away that I like the EP much better than the debut LP. There's no reason for Hater to be offended as recognition of growth and expansion is a great good to receive.

So let's return to You Tried. If anything the album has a more translucent sound. Everything has a lightness about it, except for the mood Hater presents us. The sound of everything on the record is light, transparent, yet the chords and the melodies are downcast. That makes for an interesting mix that seems to work better by the song. At the beginning of the album I simply have a hard time adjusting to this mix. From the fourth song, 'Had It All', I seem to get all I need from Hater to be able to adjust. The approach becomes more direct, slapping me in the face: pay attention, we're delivering here.

And that is what happens in 'Cry Later'. The tempo goes up as well and the drums pound beneath the riffing guitars. Slowly comparisons with Wolf Alice seep in. Hater is not that far developed (yet?), yet the fact I'm remembered of Wolf Alice says something positive in this case. Just like that U.K. band, Hater dares to set different moods to its record, not afraid to be all but one dimensional. All the while maintaining that lightness of sound and play.

Caroline Landahl's voice reminds me of Jerney Kaagman and Nena in the higher register and of Chrissie Hynde in the lower. Her voice is not powerful, yet fits this music. Mix it right and there are no troubles whatsoever.

You Tried gets the power it needs to remain interesting. In fact it is built up quite convincingly. The band clearly put effort into the track selection. The variation in the songs is another asset well-used swinging the album towards the positive some more. The before last song 'Stay Gold' rocks out solidly before the title track ends it all in a slower and more moderate way. A thin organ is mixed between the two guitars adding this little extra to the whole.

You Tried may not be an exceptional record. Taking into account that this is an effort by a band that is together for about a year, I can't find much at fault with You Tried. The album is growing on me, slowly but surely.

You can listen to and buy You Tried here: