The Deep Set. The Bats 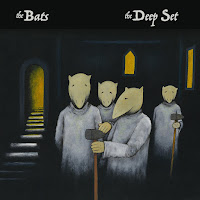 This album was sitting in my to do list for some time now. Somehow I just didn't get around to it. Time to make amends as The Deep Set is a fine album by New Zealand band The Bats.

Looking at the promo photo's that accompanied the news flashes of Flying Nun Records The Bats must be around for a while. Looking the band up that turns out as the right way of thinking. The Bats formed in 1982 in Christchurch and have released 8 albums and 7 EPs since 1984, the last in 2011. The Deep Set is album #9 after a six year hiatus. The band still plays in the original line up, which is fairly unique for bands.

Whatever went before, I haven't heard it as far as I'm aware, making The Deep Set my introduction to The Bats. The freshness of the sound is the first thing that struck me on hearing the music. From there a whole range of thoughts and associations entered my head. From REM in the opening track, to Roger Daltrey in the strained way of singing Robert Scott can resort to at times or, just to create a fierce contrast, the dreamy way of singing of Justin Hayward. The 60s are never too far away in a nice intro here or there and the 80s and 90s indie pop rock is a mainstay in this music. Music that is not shiny, happy, yet makes the sun shine without any effort.

It strikes me that The Bats doesn't put any energy into large outings or climbing high musical mountains. The joy of each and every song is in the fine details. Every song has these small or slightly larger moments. They only seem to be going about their way, but paying attention pays off. The Bats know exactly what it doing. Soft strings, the harmonies of Kaye Woodward, a banjo, an extra guitar. It takes very little to make the sun shine on The Deep Set.

There simply isn't much more to write on The Deep Set. Put the album on and it takes you on a trip of modest proportions. Put it on a head set and you're lost for this world. Now every good album will do that, but this one allows me to relax and undergo it completely, playing to my subconscious and my conscious at the same time. Music to listen to and music to dream to. There are not many albums that achieve this at the same time.

You can listen and buy The Deep Set here: