The Visitor. Neil Young + Promise of the Real 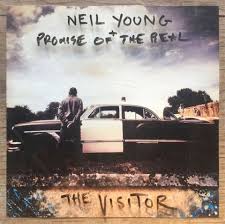 Another month, another Neil Young release? It almost starts to look like it. Uncle Neil has a prolific output and a lot to say and play in his senior citizen's years. Not all are happy with his output, but I do not see a lot of reason to complain. Oh, I'll admit happily to not listening as intently to his records of the past decades as I once did long ago. This is very different to not liking the records.

The Visitor comes just a few months after the release of 'Hitchhiker', full of previously unreleased recordings from 1976. It is his second studio album with Promise of the Real, the band that seems to have taken the place of Crazy Horse. I rather like 'The Monsanto Years', so was very curious to hear more.

Having listened to The Visitor several times since its release early December, it is easy to conclude that Neil Young delivers again. Yes, I hear his aged voice and that some of the songs are very easy going. But lets take 'Change Of Heart'. Just listen to the embellishment of the mandolin on the side of the mix with a guitar playing some lead lines in the opposite corner. The result is a mid tempo, quite endearing song over which Neil Young sing-talks with the rest of the band doing its usual thing behind him. Together the song plays out beautifully.

"I am a Canadian, loving the U.S.A." is the first line sung on The Visitor. Young tells us where he is at, for those who doubted perhaps. A statement he seems to need to make in these troubling times. Impossible to be a visitor, I'd say after living in the US for over 50 years by now.

Neil Young is of course totally in control no matter with who he works. So are there any influences to be found from working with a group of youngsters at least 40 years his junior? That is hard to say from the outside. Yet, there are several songs that have a playfulness around them that is not heard often in Neil Young songs. 'Carnival' is the most obvious example of some weirdness. This can just as well arrive from the title. More in general it can be stated that both his albums with Promise of the Real are loose in feel and play. Not so much under-rehearsed as played loosely, with a lot of feeling.

In the music the band touches on many different styles familiar to Neil Young. There's no real, big rocker, but there are rock songs, delicate ballads, some country tinged songs and some experiment with psychedelia as in 'Carnival' and alienation, like the shackles and changes in 'When Bad Got Good'. "Lock 'm up" seems a direct reference to the new normal on campaign trails for future presidents.

The album ends with a delicate ballad, 'Forever'. The mid-tempo strength of Promise of the Real showed last year in the live show in Ziggo Dome. In the even slightly slower 'Forever' things really come together. Neil Young shines as he doesn't have to exert himself. Singing to the top of his vocal range to the point of breaking. The band finds all the right notes in the accompanying playing. The composition is totally served by every single note played. One of those Neil Young songs that can go on forever (and does for over 10 minutes). There are only a few musicians who get away with this feat of an in the basis "simple" chord progression.

It is 2018 when writing this review. Neil Young does what he wants, like he has been doing for decades. It is impossible to predict what his next move will be. As far as I'm concerned a few extra albums with Promise of the Real are welcome in the next few years. I like the feel, the sound and most of the songs certainly are of decent quality. Just keep them coming.

You can listen to 'Already Great' here: