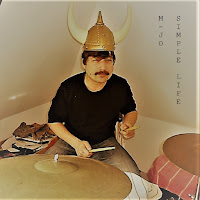 What am I looking at?, I wondered to myself when I looked at the cover of Simple Life for the first time. Charles Bronson as a young man in a rare colour photograph, while he was practising for a just as rare role as a Viking/Mongol drummer? Something like that.

My thoughts on the cover all disappeared like clouds from the sky after the rain when the sun breaks through announcing a warm summer day once I started to listen to the EP M-JO sent me. A nice piece of indie rock with fuzzy distorted guitars with a clean drum mixed in the middle. Layers of guitars fly in and out over and under the basis of bass and drum.

The fuzz gives the music a hint of psychedelia, the basis is a strong sense of rock with indie rock in the details. From the 60s to the 10s. Six decades of rock can be found on Simple Life. The EP does not let itself get caught in a small corner. It branches out in sound and approach, making it much more divers than I would have thought on the basis of the first two songs. For me it is the right approach. I got caught by the more up tempo rocksongs and hooked by the ballads on psych later on. In the last song the circle is completed with fuzzed guitars.

The EP opens with the title song. An enormously poppy opening on keyboards giving 'Simple Life' an 80s feel, that is taken away by the spacy guitars. The singing has a 60s feel to it, like the greatest underground bands from this country. The Outsiders, that sort of thing. So far from virtuoso but in your face and direct. The effect is catchy to say the least. This feeling is heightened by the second song, 'Your Call'. The pop is thrown overboard for a rock approach with loads of guitars all over the place. If I get to pick a favourite of Simple Life this would be it. I love the sound of the bass, of the guitars and the melody is elementary, yet effective. The Kinks of old with distorted guitars.

That band returns to mind when I'm listening to 'The Weekend'. Being a fan for life, it isn't hard to come up with these comparisons, yet they are correct. The influence is 100% in the melody and way of singing. That other influences come in when the solo arrives is just nice.

'Let Her Go' is an acoustic guitar strummer. For a while I'm kept under the impression that it will remain that way, until the band kicks in, with a keyboard in the lead role. Something resembling a mellotron or a real one. The sound is just great. Mark de Jonge's voice reaches for its breaking point, not afraid to sound vulnerable and show another side of the vocalist.

The EP closes with the more comically sounding 'We're Just Looking For A Bar'. Like an outtake from any famous 60s band it rocks out. The members of M-JO are having fun together and sharing some of it with us. It rocks and isn't half bad.

Summing up, Simple Life is a nice introduction to the music of M-JO. Although certainly no barns were stormed, Simple Life contains a nice collection of rock songs that have a feel for the right melodies and can be tough as well as modest and tender. Another nice band to follow.

You can listen to Simple Life and buy it when you like it here: