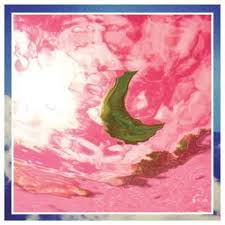 Can albums grow or is the judgement always correct at first listen? This philosophic question is nearly impossible to answer. For starters it's impossible to judge how long it will last after that first impression. There are examples of albums I truly misjudged at first listen. Soulwax's second album being my favourite example. Albums that blew me away have not always lasted. Often they have though.

Fact is that I have started to enjoy, especially the first four songs of, Django Django's  'Born Under Saturn' more and more through the past years, while I have never really returned to the first album since 2012. The reason I'm writing all this is that I felt so tremendously joyful listening to the title track of this new album for the first time. The opener is the perfect opener for the album for all lovers of songs like 'Giant'. Where do things go from here? I'll be back later in time.

Having listened some more it seems like I am bothered by the 'Born Under Saturn' syndrome again. Django Django again does what it is good at and I am having a little trouble gathering speed. On Marble Skies the band plays its modern version of pop and dance with simultaneously applying enthusiasm and keeping the brake firm in hand. It is a combination that leads to impressive songs like 'Champagne'. Loads of darkness are thrown over wishful thinking as if the singer knows the champagne and mountain streams will never be within his grasp no matter how hard he tries.

Listening intently to 'Tic-Tac-Toe' Django Django reveals how intricately it puts its songs together. Three chords in three notes? Why not. It just keeps changing them, while the song is not impaired by the fact that what lies underneath it is so full of unrest. The brilliancy is in fact in the wholeness of the song while in fact it is more like the debris of a crashed crystal vase. The beat and the vocal melody keep it all together anyway.

Django Django is a fourpiece. Listening to the records I truly wonder how the band ever reproduces its music on stage. So much happens that (a lot of) electronic assistance is necessary. Nevertheless I am sure that the band does deliver live. Perhaps I'll be finding out soon. Like in 'Beam Me Up' all seems synthesizers and keyboards, beats and all. So four members behind synths like Depeche Mode and Soulwax? Why not? With those two names some of the influences on Django Django come to the surface not just a little.

No matter how electronic, perhaps even lifeless 'In Your Beat' sounds at first listen, again the sun comes out because of the pop feel the band manages to put into the song. The electronic notes and beats are leapfrogging over each other to get to the other side. Singer Vincent Neff just hails his notes in celebration of his singing.

Every song on this album could have its story. You get the drift. Marble Skies is growing on me and faster than 'Born Under Saturn' was able to do. This album is even more electronic with its blips and blops from a long time ago over extremely modern rhythms creating something very here and now with just a hint of nostalgia. Django Django have done it again. One of the first great releases of 2018 it seems.

You can listen to 'Tic-Tac-Toe' here: