Memphis circa 3AM. John Paul Keith 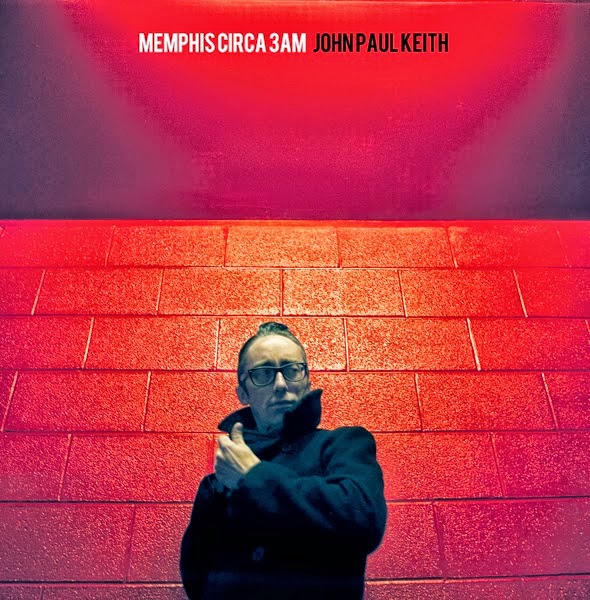 Several ago John Paul Keith played the Q-Bus in Leiden. As more or less promised at the end of the well-read review of his show, here is the review of Memphis circa 3AM.

The only John Paul Keith album in my possession before the show, was The man that time forgot' (2011). This album had its moments, but overall shot off in too many direction to really make a lasting impression on me. This hadn't changed over the years I noticed as I "prepared" myself for the Q-Bus show. I went anyway because I was fairly sure that I was in for a treat live; and wasn't disappointed. That made me buy Memphis 3AM to give John Paul Keith a second chance on record. Again I wasn't disappointed. The Johnny Cash like chooga choogy rhythm of 'There's a heartache gong 'round' is not my style, nor is another more country like song. JP loses me for a while at those points. By then it is forgiven. This album has a lot of songs on it that I do enjoy, greatly.

John Paul Keith is a retro rocker. There's no other word for what he does. Not a song goes beyond 1970 if not 1965, a pre The Beatles era of good old American rock as made by the likes of Roy Orbison, Ricky Nelson, Elvis, Johnny Cash and The Everly Brothers. And all songs with a signature guitar solo, as JP Keith is a fab guitarist, having mastered several styles, which makes his playing varied and nearly every time of interest to listen to intently. Sure country comes by again, 'Ninety proof kiss', is as country as country goes, but great to sing along to in bars and venues. On record with a nice rolling Jerry Lee style piano solo. 'If you catch me staring' is sort of an early The Beatles song or any other so called Merseybeat song. A mix of 1963 Liverpool and Roy Orbison. The guitar and piano work is so beat era, the singing Orbison. A great mix of two styles.

With 'Walking along the lane' one of the absolute highlights of Memphis 3AM comes by. A rolling song, somewhat honky tonk, which ends far too soon, but let's not forget the pleasant way this album starts. The driving rock of 'You really ought to be with me', with the rhythmic organ playing and rolling drums, is a fantastic opening song, that sets the stage for many a thing to come. With a blistering guitar solo to boot. Stevie Ray Vaughan with a melody. A song that has been done a million times before and still manages to stand out. It is followed by the darkness of 'We've got all night'. Chris Isaak in 2013 with a darker edge. Deep guitar lead notes. Next is 'Everything is different now'. This song invokes a million memories as well, but has all it takes. 'True hard money' sounds like anything The Rolling Stones or The Fabulous Thunderbirds used to play a long time ago.

Yes, John Paul Keith is a retro rocker, who excels live, but on record knows how to make his version of old truths shine also. I may not like all the styles that Keith chooses to explore, all are done in good taste. And the good thing is, that when he does a John Paul Keith, like in 'Walking along the lane' he shines just this little extra. Memphis 3AM may not be for everyone, but if you enjoy good time mid to late 50s and early 60s music in a modern sound, you can't do much better than this album.

You can listen to and order Memphis 3AM here: http://johnpaulkeith.net/main/?page_id=7
Gepost door Wo. op 11:21