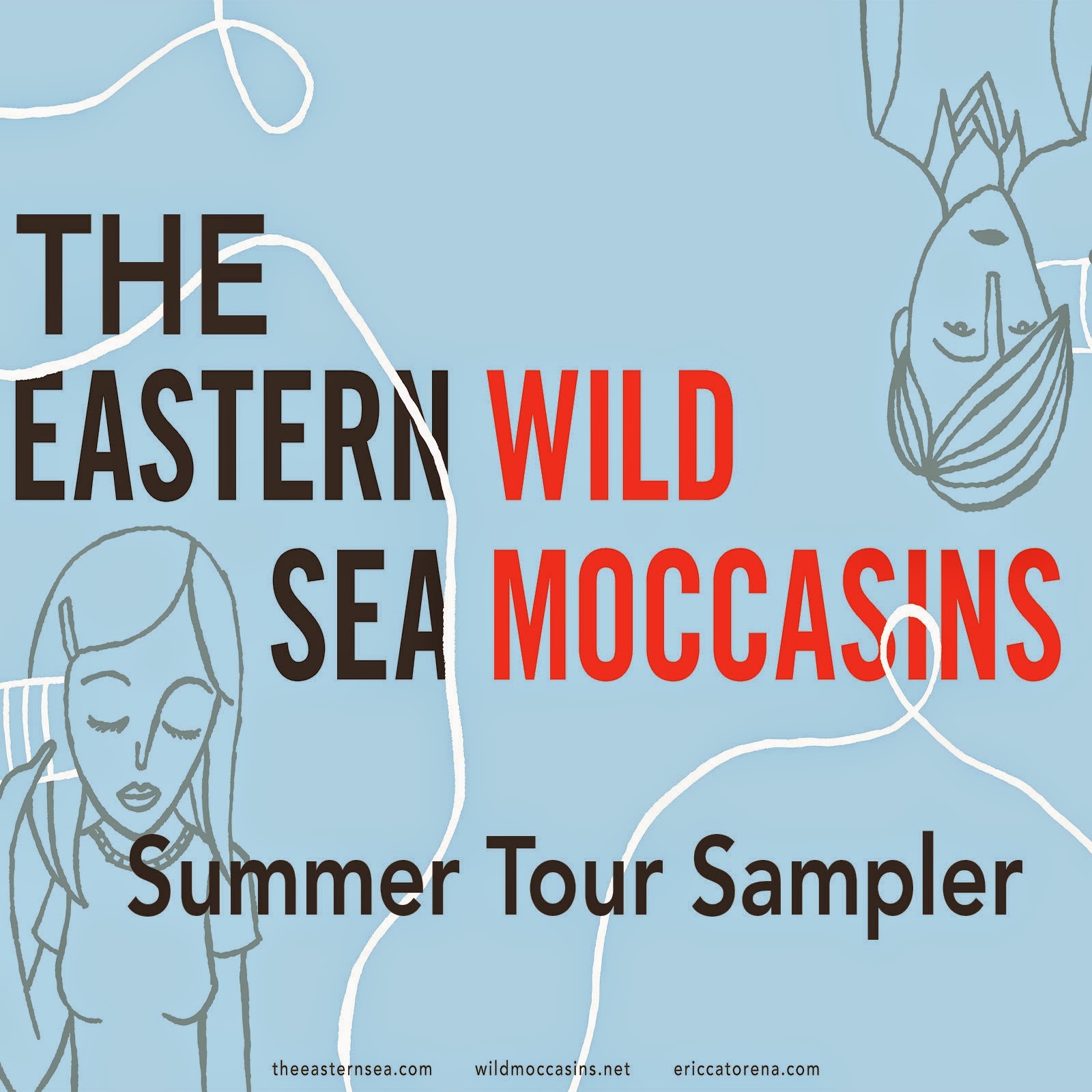 As promised recently I would look into some of the albums I found on Noisetrade.com where I tend to trade my time, attention and views for the music on offer there. This time it is to review an EP shared by two bands, The Eastern Sea and Wild Moccasins. For clearance sake I will split the review in two. As a whole the EP has an impact, but it seems best to look at the two acts separately..

Wild Moccasins is from Houston in Texas and in no way reminds me of acts usually coming from Texas. There is no hint of country, blues, polka and what have you in the music of Zahira Gutierrez (Vocals/Keyboards), Cody Swann (Guitar/Vocals), Andrew Lee (Guitar), Nicholas Cody (Bass), John Baldwin (Drums). Instead it is all Britpop and what went on before that. As said Deacon Blue, but also Texas, Fairground Attraction, the sort of pop coming out of, well, mostly Glasgow from the second half of the 80s. And then there is this little extra. Like the best of Britpop bands Wild Moccasins adds this delicate pop feel in the vocal melodies. To this potent mix the best the U.S. has to offer since Phil Spector is added. The singing of Zahira Gutierrez has this trace of innocence, combined with a deeper sense of longing in it. Not unlike Spector's female singing heroes. This addition makes Wild Moccasins very attractive to listen to.

Musically Wild Moccasins is extremely upbeat. Light sounding guitars paint soundscapes of a lighter or slightly heavier variety. The drummer, John Baldwin, has an outstanding speciality. He uses drumrolls a lot, even to accentuate the rhythm and not just to drive a certain part of a song forward. That gives Wild Moccasins something of its own sound.

There is an album out, the debut album of the band: 88 92. Chances are more will follow on this blog in the near future.

The Eastern Sea
The Eastern Sea holds all the even songs in the line up of this EP. The contrast between the music of the two bands on this EP are quite big. The Eastern Sea holds back a lot more and builds up a song, using dynamics more. Opening song 'The match' fits into the folk rock scene a lot more also, with a whole sequence of percussion only behind the vocal. This makes The Eastern Sea a lot less poppy. Instead it forces the listener to be alert, as a lot is going on. Although it is not instantly tickling the pop strings in my brain. Something is tickled though.

The Eastern Sea is also from Texas, Austin to be more precise and started as a bedroom project of singer Matthew Hines. Through the years a band formed around Hines, although my impression is that it is more a vehicle for Hines' needs than a real band, judging from the long list of ex-members. Perhaps that has changed through the years, I don't know. The band released two full albums in 2011 and 2012 as well as a Christmas album in 2012. All missed by me.

The songs on this sampler show a band that is more introspective that extrovert. The music reminds me of some songs of Lauren Mann and Morgan Mecaskey, two acts I also found through Noisetrade. More familiar names are The Decembrists of which The Eastern Sea is a modest version. 'Wasn't for love' introduces a horn section to the music, which works extremely well in this hunted, driving song. It is in those moments that The Eastern Sea starts giving away some of its inner secrets. Because the contrast with Wild Moccasins' exuberance is so great, there are a lot of fine, fine details that tend to get lost. 'A lie', the last song on the EP, is another example of an undercooled but great song that falls away behind 'Born blond'. Again these dynamics and surprising changes in the background of the song. As listener I never know what will happen next. By that time The Eastern Sea has won me over also. As I said, something was tickled. My attention and fantasy.

Conclusion
Summer tour sampler is a strange combination of songs by two very different bands, that both excel in their music. Although the former may excel in U.K. (Glasgow) 80s pop and the latter with some pushing and shoving can be filed in the recent folk rock movement, both show their best. My tip is though to split their contributions and listen separately to really enjoy the best of both. That is when their best comes out.

You can listen to and download the Summer tour sampler on noistrade .com: