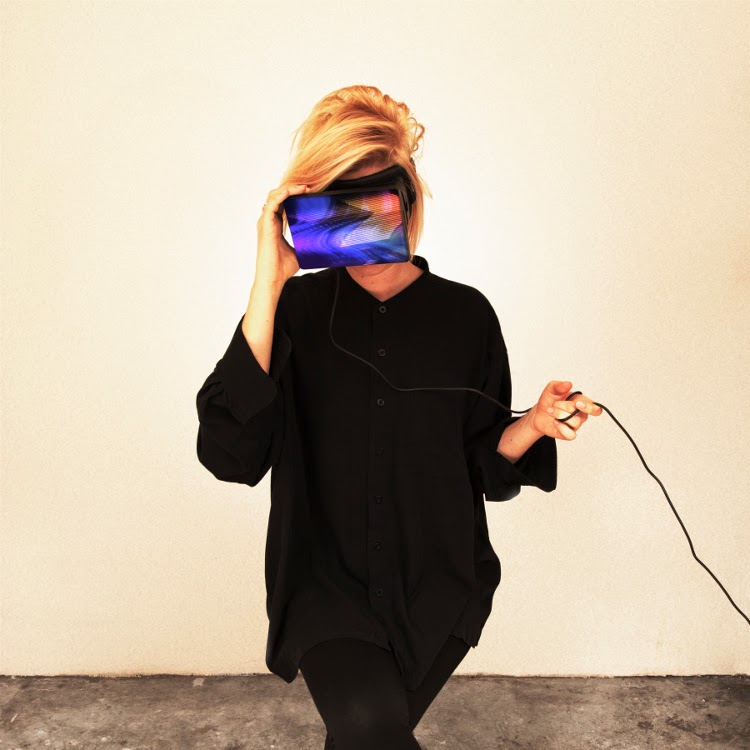 In 'Oor' I read a review stating that the debut album of EMA was the best record of that year and that it was so hard to get a grip on this new album. That made me curious. What kind of album would this be?

EMA is Erika M. Anderson, a U.S. singer, originally from South Dakota. Following 'Little sketches on tape' (2010) and 'Past life martyred saints (2011), The future's void is EMA's third album. Having missed both previous efforts, it is possible for me to listen to The future's void like a tabula rasa as far as EMA is concerned.

The future's void is not your average album. To write that it has some theatrics and antics in it is something of an understatement. Like writing that Cristiano Ronaldo's recent way of celebrating a goal is completely normal behaviour. The first distinctive feature of this album is that no matter what is going on, there is background noise for most of the time. Droning electric sounds fill the holes in the mix. Sometimes in the background, sometimes the backbone of the song. The second feature is that The future's void balances on a thin line between rock and dance. From both come elements that create the sound of EMA. It is also the reason that my appreciation of The future's void can go any way depending on my mood. 'Neuromancer' is such a song. The song is built from rhythms, strange rhythms as well. While EMA takes quite a rock stance in the singing. As if the vocal melody comes from a totally different song. Opening song 'Satellites' is sort of the same, but as a song opening the album it overwhelms. The strong voice, bare or treated, all the powerful noises coming from everywhere make for a potent mix, leaving the listener behind sort of breathless. Sounds bringing to mind music I listened to a long time ago, without being able to pinpoint the typical piano playing.

In 'So blonde' EMA is totally a rock chick, shouting like Courtney Love 16-20 years ago. A song to instantly like. 'When she comes' is the soft version of Hole. An acoustic guitar, bas, drums and droning noise in the background. Singing with a soft voice, loads of harmonies. Man, do I love this song. By then it is clear to me that EMA has several faces and is willing to show them all. That makes The future's void an as uncatchable as unpredictable album. A piano ballad with some chamber orchestra strings? There's '100 years' for you. When listening to this album for the first few times is like riding a roller coaster in the dark. There's no predicting what's up next. Sort of impressive while holding on tightly as a result of anxiety.

Taking The future's void all in, it is hard to really form an impression of the album. What speaks for it is the voice of EMA. Sort of supple, with several tones and heights within its reach. What speaks for it is the adventure that the listener is taken on. Against is that I just don't like the approach taken in some songs. Too moody, drony, dancey, whatever. EMA does not let herself be caught out by limitations, restrictions or conventions and that in the end wins me over and made me listen to The future's voice more often, despite my reservations. An album that is slowly growing on me and will probably remain to do so over the coming months.